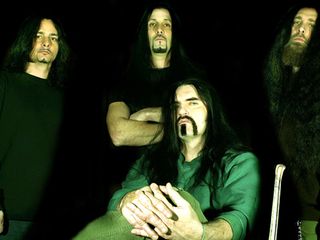 After this photo was taken, they all started laughing

Fueled by Peavey amps and guitars, goth metal stars Type O Negative will be hitting the road, starting May 16, as co-headliners (along with Hatebreed) for the 2008 Jagermeister Music Tour.

But it's also a contest: At each stop on the tour, one lucky fan will win a Peavey Rage guitar amplifier customized by Peavey with a special Jagermeister artwork design.

Type O Negative is touring behind its latest release, Dead Again, its seventh album of dark, brooding goth metal. Peavey endorsers Slipknot, Chimaira, Arch Enemy and Stone Sour have appeared on past tours, and Peavey has sponsored the semi-annual Jagermeister Music Tour since its spring 2003 outing.