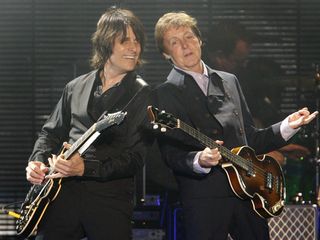 Since 2001, guitarist Rusty Anderson has been a key fixture in Paul McCartney's touring band. In addition, the California born-and-bred musician has played on several of Macca's recent albums.

"I still feel like I'm living a dream," says Anderson. "Everytime I go on stage with Paul, it's the most exciting thing in the world. There's not a day that goes by when I don't realize how lucky I am."

So how did this self-described "journeyman guitarist," who has played in dozens of bands and hundreds of studio sessions (he even played the solo on Ricky Martin's Livin' La Vida Loca!), score what Anderson calls "the gig of a lifetime"? And what kind of advice does he have for other musicians hoping for their big break?

MusicRadar asked him just that.

How did you come to play in Paul McCartney's band?

"Basically, it all came about through the producer David Kahne. David and I had worked together on a number of albums, like The Bangles and a few others, and one day he called me and said he was going to be producing the new Paul McCartney album - this would have been Driving Rain.

"I said, 'Great, man! That sounds awesome.' And then he said, 'And you know, I might be needing some extra guitar on it.' I knew he meant me, but I didn't want to actually believe it until I knew for sure, until I got the firm phone call, you know - 'Come on down, Rusty!'" [laughs]

Next: Auditioning for McCartney

Once the phone call came, what was your first meeting with Paul like? Did you have to audition for him?

"It was an auditon but nobody really called it that. I went to the studio in LA where they were working, and there he was - Paul McCartney! [laughs] I was so nervous just shaking his hand. I was trying not to tremble and stutter, you know? I'd been around stars and studios a lot, but hey, this is Paul McCartney. It doesn't get any bigger."

But Paul's been through that a million times. Does he have a way of making people feel comfortable?

"Absolutely. He doesn't act the star at all. He's just cool and down-to-earth. He didn't put any kind of pressure on me. It wasn't like, 'OK, man, I have 15 minutes. Let's see what you got.' He was just happy and friendly and ready to make some music.

"Within an hour we were cutting a song. So even though it was an 'audition,' it didn't feel like one. See, that's the great thing about Paul - he'll give you time and space, but he's paying attention. He can get a sense about you very fast. He knows if you're meant to be there or not. Luckily, for me, it was my time to be there."

Still, it must have been a surreal experience to go into a studio and suddenly start playing with Sir Paul.

"Oh, it was totally surreal! There I was, I had my guitar strapped on and I'm looking over at Paul with his Hofner bass on, and I'm thinking, 'This can't be happening!'

"It took me about a week to get used to being around him, to stop thinking of him as a Beatle or an ex-Beatle, you know? But he wants that. That's what he requires out of people. He doesn't want to be on a pedestal. He really enjoys being a guy in a band. Which is what I enjoy, so I think that's why we bonded.

Next: Making music with McCartney

The drummer Abe Laboriel Jr was part of this session as well, right? This was the start of what's been Paul's core touring band.

"That's right. Abe was there and we clicked. Paul got a good sense of us working together as a team."

Now, you're a guitar player. But Paul's not too shabby on the guitar himself. Did that intimidate you?

[laughs] "He's a great guitar player, bass player, he can play drums, keyboards - you name it. But no, I couldn't be intimidated; otherwise, I would have choked.

"Sure, part of my brain was going, 'He's Paul McCartney - I'm not worthy!' [laughs] But the other side of my brain, the one I let take over, said, 'Paul wants you here. Prove it to him.' And the only way I could do that was by being myself, Rusty Anderson, a guy who can play good guitar.

"And that's the thing: I'm more comfortable playing the guitar than I am doing the laundry. The guitar grounds me. Without a guitar in my hands, I don't know what I'm doing." [laughs]

The set you play with Paul is 70 percent Beatles songs. Does Paul give you direction? Does he want it just like on the records, or does he let you do you own thing?

"It really depends on his mood. You gotta remember, those songs are sacrosanct to me, but they are to him too. At the same time, there's Beatles cover bands all over the place, and Paul knows this. He doesn't want to be in his own cover band. He doesn't want it to be like karaoke."

I've seen you play with him. You guys do so many Beatles hits, but they sound very fresh.

"That's exactly what Paul wants. He never goes into it like, 'OK, time to roll out this old hit - again.' He wants every song, no matter how many times he's played it, to sound new and vital."

Next: Putting a new spin on the classics

Specifically, though, how do you as a guitarist keep the classics fresh? Do you try to throw some of your own licks in where you can? It seems as though you do.

"I do, but I try to be very thoughtful about it. Thoughtful but spontaneous. [laughs] Of course, when we play a Beatles song, I'll play the main licks that everybody knows and loves, but I try to throw my own thing on it so that it has a new kind of personality.

"Think about it: Even if The Beatles were still together, do you think they'd be playing these songs exactly as they were on the records? I don't think so.They'd be bored crazy! It's a tricky balance to give the people what they want, but keep 'em guessing too. That's what Paul is all about: don't just play the song, perform it!"

You've been with Paul for some time now. Has he ever told you specifically what he likes about your playing?

"He's a man of few words. He will occasionally say, 'Wow, Rusty, I really like that bit you did.' But oftentimes it's about what he doesn't say, The bottom line is, I'm still with him, so obviously he approves. That's the compliment right there." [laughs]

When you guys play the three-way guitar jam on The End [McCartney and touring guitarist Brian Ray also take part], you play the George Harrison second slot a lot. Do you sometimes change the orders around?

[laughs] "I have no idea! Isn't that weird? We just go off, the three of us, and we have a great time. I think Paul usually starts it off - after all, it is his song. But we just go for it. We jam. Paul's a jammer. He loves to play - and play off the other musicians."

In addition to your work with Paul, you have a solo album you're finishing.

"That's right. It's called Born On Earth. It should be out pretty soon. I'm just now finishing the last bits of mixing. I'm not really good at describing it - you know, 'It's an industrial album, it's a country album, whatever.' It's a rock album. If you like rock, you might like it.

"I've done most of it myself, but my drummer, Petur Smith, co-produced it. I did most of the writing. I'm very fortunate in that I have a nice studio in my house, which is a dream come true. I can track drums and do everything; the whole thing grew from a PortaStudio into a real studio."

So what kind of career advice can you give to all the young Rustys out there, the guys who want to do what you're doing?

[laughs] "'All the young Rustys' - I like that. Well, what I can tell people is that they have to love playing music. You can't go into this and look at it as a job. I mean, it is a job and you do have to have a sense of business acumen. But music is a passion, an obsession. I think that's what separates the people who ultimately make it from those who don't.

"What I can also say is, as trite as this sounds, is that you have to follow your heart. Be creative, be yourself, earn your shot.

"You can't stress out too much about making the right decisions. Just create. Do. Play. There's always surprises down the road, and hopefully more good ones than bad ones. Joseph Campbell said, 'Follow your bliss,' and I can't improve upon that."

OK, one last question: I just have to ask, what was it like playing on Ricky Martin's Livin' La Vida Loca?

[laughs] "I should've known that would come up! My friend Rob Rosa, who was co-producing the track, came over and he played me this demo and said he needed some hot guitar on a section. So I said, 'OK, let me come up with some cool shit.' Simple as that. It was supposed to be just for a demo, but it wound up making the finished song.

"Before you knew it, the track was a smash, a No. 1 hit all over the world. I gotta tell you, it was crazy. I'd be at the supermarket or the gym and this song would come on, and I'd go, 'Wow, that's some pretty good guitar playing. Sounds kinda familiar, though. Wait a minute...that's me!'

"But it all ties into what I was saying. You can't plan on these things.You just have to do what you love and be ready for what comes your way."