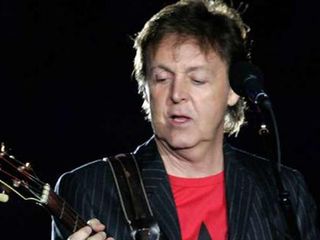 He had a ticket to ride

Back in his Beatle days, Sir Paul McCartney was used to rushing from gig to gig, and the ex-Beatle found himself doing so once again recently when he turned up as an unannounced special guest at Billy Joel's Last Play At Shea - the final concert to be held at the iconic stadium before it is demolished.

McCartney had just finished his own show in Quebec, Canada and little time to make the concert with Billy. There were doubts whether he would be able to hit the stage at all.

"I really wanted to do it as Billy is a mate and I have such special memories of Shea," says McCartney. "I had to fly to New York City to get to Quebec and it kind of dawned on me that as I was flying (back) Friday evening I might just be able to make it to Shea by the end of the show. So I made a few calls and the rest was to be left to fate. I knew it was going to be close though."

In order to make the concert, Macca, Hofner bass in tow, had to dash from the airport to the venue with a police escort. It took just 11 minutes to make the journey.

"It was crazy. I'd been on a plane for hours and had no idea how far into the show Billy was," says McCartney. "The pilot had been keeping us informed of how we were doing time-wise and we found out later that air traffic control had worked hard to ensure we landed on time, but then there was still going to be the traffic to negotiate in order to make it for the show. When the plane doors opened I was met by the police and airport security, who rushed me straight through all the arrival procedures and then got me out as quickly as possible."

But once he took to the stage - to the deafening roars of the shocked audience - McCartney found himself ready to rock. "Shea was a blast! I can't tell you what it felt like to be back there onstage after all these years. Standing out there on stage and hearing the crowd, all the memories came flooding back of being there all that time ago with the band when we first toured the US.

"It was mad the first time round because we didn't really know what to expect, as no one had ever played a stadium show before. Like a lot of things we did, it was going into the unknown. The technology was so different. We couldn't really hear ourselves when we played there as the crowd were so loud. Vox had specially designed us 100-watt amplifiers but they were nowhere near loud enough.

"The crowd were just as loud this time round but technology has moved on now so we can hear what we are playing. This stadium is such a special place to us. We'll never forget it and its memory will live on."

And for those who couldn't be there, here's a taste.