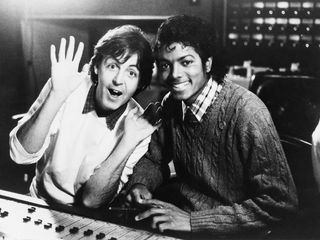 McCartney and Jackson in the studio (Image credit: Linda McCartney/Bettmann/Corbis)

Paul McCartney is going on the record regarding the reports, widely circulated in January, that Michael Jackson, believed to be in ill health at the time, had amended his will and was leaving his share of The Beatles catalogue (via his half ownership of Sony/ATV) to McCartney.

At the same time, Sir Paul is addressing reports that surfaced this week that he was 'devasted' to find ot that this wasn't the case, that Jackson never changed his will in this manner.

On his website, McCartney states: "Some time ago, the media came up with the idea that Michael Jackson was going to leave his share in the Beatles songs to me in his will which was completely made up and something I didn't believe for a second.

"Now the report is that I am devastated to find that he didn't leave the songs to me. This is completely untrue. I had not thought for one minute that the original report was true and therefore, the report that I'm devastated is also totally false, so don't believe everything you read folks!"

In conclusion, McCartney says, "In fact, though Michael and I drifted apart over the years, we never really fell out, and I have fond memories of our time together. At times like this, the press do tend to make things up, so occasionally, I feel the need to put the record straight."

Then flush with Thriller cash, Michael Jackson purchased the ATV Northern Songs publishing catalogue in 1985 for $47.5 million. The catalogue included the complete works of John Lennon and Paul McCartney.

Jackson's purchase of the song catalogue didn't sit well with McCartney, and possibly it led to their drifting apart - in a 2006 interview he said, "You know what doesn't feel very good, is going on tour and paying to sing all my songs. Every time I sing Hey Jude, I've got to pay someone.

And that catalogue of songs Jackson bought for $47.5 million? It is estimated today to be worth $1.5 billion.