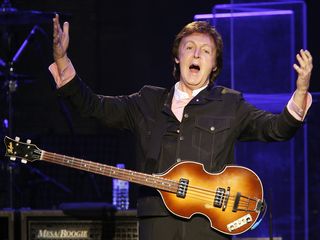 Paul McCartney is saying goodbye to EMI and hello to the Concord Music Group, yanking his post-Beatles recordings from the music giant's archives in favor of the indie.

Although McCartney's contract with EMI expired in 2007, his back catalogue, which includes his recordings with the band Wings as well as pre-2007 solo releases, remained with the major label, according to the Wall Street Journal.

The ex-Beatle's dissatisfaction with EMI has been well known for quite some time, dating back to when Terra Firma acquired the label in 2007. Since then he hasn't expressed much love for the label, at one point telling a reporter that management treated artists as "part of the furniture."

In 2007, McCartney signed with Concord's Hear Music label (a division of Starbucks), via which he has issued three releases, Memory Almost Full, Amoeba and Good Evening New York City.

McCartney is but the latest major artist to depart EMI since Terra Firma took hold. Other notable ex-EMI recording acts include Radiohead and The Rolling Stones. While EMI still controls Radiohead's catalogue, the Stones were able to take their older works with them.

McCartney regained the rights to his EMI solo and Wings recordings in February. As part of the new deal, the first McCartney project for Concord will be a deluxe reissue of Wings' 1974 album Band On The Run, which will include previously unreleased material.

"I've had a good working relationship with Concord," McCartney said in statement. "I'm looking forward to continuing this relationship."