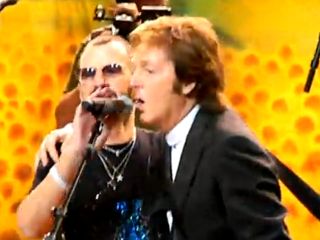 The song was appropriate, of course, as yesterday was Starr's 70th birthday.

Many in the crowd were unprepared for such a show-closing event. After the intended encore, which saw Ringo and his All Starr Band joined by Yoko Ono, Joe Walsh, Steve Van Zandt, AC/DC's Brian Johnson(!), Jeff Lynne, Nils Lofgren, Max Weinberg, Foreigner's Mick Jones and others for With A Little Help From My Friends, people had begun to file out.

But when a roadie appeared with a Hofner bass, the audience rushed back to their seats for the grandest of all finales.

And in case you missed it, check out MusicRadar's salute to Ringo Starr with a video guide to 14 of his greatest drum performances.