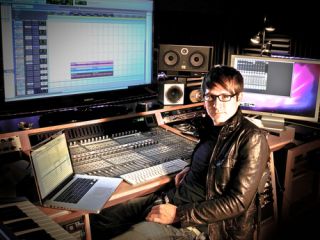 These are the toys that a number one single can get you. Adam Young - aka Owl City - in his home studio. © Owl City

Although he's now known to the world as Owl City, creator of the mesmerizing, number one smash single Fireflies and the shimmering, mega-selling album Ocean Eyes, it was only a few years ago that Adam Young was attending community college in Owatonna, Minnesota while loading Coca-Cola bottles onto trucks. Battling insomnia, he recorded music in his parents' basement and dreamed big dreams.

"I guess I am an example that unbelievable things can happen," Young says. "But it's only because I made the kind of music that I could feel good about. If you do that, chances are other people will respond. All you need is the right music and the right set of circumstances."

Success has afforded Young the opportunity to tour the globe ("an incredible experience, as you can imagine"), and it's also bought him his own house, with a brand-new, tricked-out studio. And it was in his just-purchased abode that Young got down to business, with the result being the bigger and bolder All Things Bright And Beautiful (due out 14 June), a glorious collection of 12 songs that are sure to transport listeners into states of utter bliss.

Young's breathy, innocent tenor remains the album's dominant instrument, but he's expanded his rhythmic and sonic palette. Forceful guitars are very much in evidence on the new set, as are dance grooves. The album's lead-off single, Alligator Sky, which features an appearance by the LA-based rapper Shawn Chrystopher, is already turning heads. "Even though I want the music to be very identifiable as Owl City, I had to stretch things a bit," says Young.

And that he has. MusicRadar sat down down Adam Young recently to discuss All Things Bright And Beautiful. In addition, we talked about the changes to his studio and live setups and how he's managed to remain grounded despite growing fame and fortune.

First off, let's talk about the title, All Things Bright And Beautiful. It certainly conjures up a myriad of images.

"The title is definitely pulled a little from the book of the same name by James Herriot, although to be honest, I never read that particular book in the series; I was more familiar with the original poem-slash-hymn that the book is associated with. The title definitely spoke to me.

"Kind of the way that it was with Ocean Eyes, I created these mile-long texts on my laptop with titles and ideas. Then I looked at them later with fresh eyes to see what jumped out at me. This time, All Things Bright And Beautiful did just that. It says a lot."

How are you feeling now after the success of Ocean Eyes and Fireflies? A little older, a little wiser?

"Yeah, definitely in both cases. It's kind of a funny thing to come to grips with what happened to me in the past couple of years, the whole whirlwind of zooming from 0 to 60 and then going back to create this new record. I feel like I've lived two different lives recently, and I'm just trying to find my way.

"But it's been great, though. I'm so excited looking forward to this new release. I feel as though I have a bit more resolve, a bit more of an idea what to expect. If the record bombs, if no one likes it, I still feel good about this next chapter."

When you started out in your parents' basement, the stakes were low. Nobody knew you. Now you're a hit, and people and banking on you to deliver again. Despite what you just said, were you feeling a bit of pressure recording the new album?

"That scenario is very new to me, for sure, especially during the past few months. To paraphrase the saying, I had my whole life to write Ocean Eyes and only several months or whatever to write the new one.

"When Ocean Eyes did way better than I or anybody else involved could have imagined, the label and business people said, 'That was amazing, that was incredible. No pressure, but we want more of that.' [laughs] I think it came down to a positive pressure, though. I had a bigger sense of purpose than I ever did. Rather than try to write a radio hit, I wanted to stay true to myself and the direction I felt I had to go in. I need to feel proud of what I do, and I'm incredibly proud of this new album."

You've said that when you started writing songs, you wrote about all the places you dreamed about seeing. Well, now you've seen them, at least some of them. Has that changed your perspective as a songwriter?

"It's really helped me to put a face to a name in terms of the world. Plus, it's really helped me to get my head around what's out there. It was so interesting now to look back lyrically and see how literal - sometimes, I guess - the idea of singing of these different places could be. Because I've been to the Great Wall Of China, I've been to Sydney, Australia and Hawaii and whatnot - all of these places I thought I'd never see. Now they have a place in my consciousness, and they worked their way into these new songs. The entire experience grounded me in reality."

You achieved real success on MySpace and the internet, which led to a record deal. What kind of advice do you have for other musicians? Let's face it, not everybody can repeat what you did.

"For me, I think I might have been in the right place at the right time, the whole convergence of circumstances that happened for me. With MySpace, I might have been at the forefront of the way people could discover new music. Now, there's so many ways to get your music out there because of the internet.

"As far as offering advice to other musicians, I think if you're really creating the kind of music you want to hear, that's the best thing you can possibly do. You have to have a healthy amount of pride in doing what you do vs just creating something for labels or the business. You have to satisfy yourself first and foremost."

How did you change or expand your instrumentation? Have you been working with different recording gear, changing your setup in any way?

"Yeah, on this new record, I really tried to polish up what I knew about engineering and producing. I certainly got a lot of new gear in the studio. Being that I'm into the techy side of things, I poured over all the manuals. But I also paid a lot of attention to songs, how to create them from the ground floor up. I definitely wanted things to sound bigger and better - maybe that's the 'older and wiser' thing." [laughs]

There's a greater variety of sounds on the new album, different rhythms - Honey And The Bee has acoustic guitar -

"Yeah, that's me playing a Taylor acoustic on that track. I got a deal with Taylor. It's so cool - I'm like a little kid on Christmas. I was like, 'Wow, this thing's incredible!' when I took the wrapping off of it. It's a great-sounding guitar."

Deer In The Headlights is a pretty rocking yet danceable tune. Musically, what inspired you this time?

"Almost the fact that I tried not to look back at the last record. I don't want these gold and platinum discs on the wall staring me down. Instead of getting lost in that 'Can I do it again?' attitude, I took my success and used it as fuel for the fire. Deer In The Headlights was me taking a bit of a Blink-182 rock sound - a lot of electric guitar, kind of a live drum sound. I wanted to have a bit of a different flavor but still keep the essence of what people might expect from Owl City.

What kind of guitar and amp setup do you like to use?

"I really like using a Fender Telecaster. For amps, I used this Orange combo 2x12 - that's what I'm going to be taking out with me on tour. It'll be good, because in the past we've used those Line 6 POD modules, so this will be new territory to explore."

Dreams Don't Turn To Dust, like a lot of songs on the album, is very upbeat lyrically. Are you a pretty positive person?

"Yeah, I like optimism when it's conveyed in songs in a very sincere and honest way - as long as it's not too cheesy! [laughs] I think there's something inspiring about optimistic lyrics when you combine them with melancholy music. Dreams Don't Turn To Dust is an example of where I wanted to pull the overall sound of the album. In fact, it was kind of inspired by that '90s hip-hop group A Tribe Called Quest. There's a bit of a walking-speed loop that drives it."

Speaking of hip-hop, what led you to have Shawn Chrystopher do a guest rap on Alligator Sky? Although there are two versions of the track, one with the rap and one without...

"Yeah. That was a bit of a stressful situation because we didn't know who we were ultimately going to get. I felt that it had to be the right guy with the right inflection. The voice had to feel a certain way. I didn't want the track to sound too gangster or too street-thug, and Shawn just killed it. He was a great guy to work with. We didn't get a chance to record in the same room - we just sent files back and forth. But I'm really happy with what he did."

The album's release has been pushed back a month. Why the change?

"That was a last-minute thing just to make sure the new single was set up properly and the music video was ready to go. I know it's always a bummer when these things happen, and people always want to know the back story, but that was purely a chance to take one more breath before the plunge. A month is a long time, but everybody's super fired-up. Fingers crossed!"