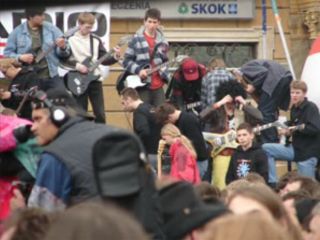 It's a world record! Thanks Jimi

More than 1900 guitarists at the 6th annual Thanks Jimi Festival in Poland have broken the Guinness World Record for the largest guitar ensemble. They playing Hendrix´s Hey Joe for five minutes in unison, claiming the title from last year´s Smoke On The Water entries.

The Thanks Jimi Festival is dedicated to the music of Jimi Hendrix and takes place every year in the Polish city of Wroclaw. This is the third time the event has played host to the world record having successfully gathered 1572 guitarists in 2006 and 1881 in 2007.

The exact number of participants has yet to be confirmed by Guinness. If you´re wondering what 1900 guitars playing Hey Joe simultaneously sounds like, watch this video.