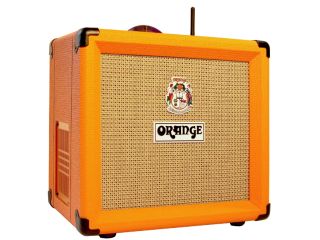 Orange Amps OPC: look out for it in August.

Orange Amplifiers' OPC - a computer-powered amp - was announced back in April, but since then, guitarists have been craving more detailed specs, pricing information and news on availability.

- 15 watt RMS per channel stereo amplifier (into 4 ohms) with 2 band EQ, - 2 x JBL 6.5" 55 Watt RMS Dual Concentric Speakers both mounted into an optimised cabinet for enhanced cooling and acoustics.
- Portable strong lightweight vinyl covered wooden case with an all aluminium powder-coated chassis featuring the same iconic design as a small Orange Amplifier optimised for personal computer use.
- Direct stereo line to the internal amplifier allows the OPC to be used as an amplifier and speaker for any playback device- from iPods to Microphones

- 24-bit audio interface with both guitar and microphone inputs