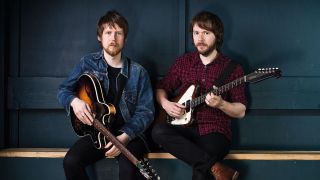 "My first ever gig as a kid was at primary school. We did a term in music on the blues, and I grew up with my dad feeding me blues and folk records so I felt like I had some sort of inside knowledge at the age of six or seven.

"We had to do a school concert and I practised for about three months for this big moment of playing in front of the school on a borrowed Encore electric - and then spent the entire first five minutes in front of the entire school fiddling with a faulty jack on this guitar.

"It was literally the most embarrassing moment of my life, and my dad had got out of work to come and watch it. I can remember afterwards just being inconsolable with grief."

"There's a '67 Firebird that I've had forever, and I've just bought a 1971 Fender Super Reverb to replace the Marshall that I had, because I can't seem to live without the reverb circuit from Silverface-era Fender amps. I think they're absolutely wonderful.

"But yes, that's original with, like, stock speakers and I've just bought an Analog Man Sun Face fuzz. I have a Cry Baby, an MXR Uni-Vibe pedal, and an MJM Octavia pedal.

"I think it's a Roctavios or Roctavius [It's Roctavios - Ed], I can't remember. It's like a prototype one and it's that worn, I can't see the label any more. And then I got a really nice old Dynacord tape echo that had been restored: it's quiet and the echoes are very clean and lovely. And I just use it mainly as a preamp, so that sits on top of the Super Reverb."

How do you warm up before a gig?

"A while ago, we started doing weird stretches together, because Dan, our bassist, is a Taekwondo instructor, and with everyone being in vans and driving around means we often get bad backs and necks and everyone's feeling pretty ropey.

"So he gets us in a huddle and makes us do all sorts of weird yoga moves and stuff like that. I hope no one ever sees it, because it would be horrendously shocking."

What's the best way to get a crowd on your side?

"Well, we're kind of just four blokes, really boringly standing there with guitars! So we tend to try and make the playing the focus: if we're playing well, then the gig is going well and the crowd respond to it. But it can really go flat if things aren't quite right.

"So I think the key is to just play as hard as possible, and get so into playing that time can pass without you noticing. It's that kind of feeling. If that happens, then you can feel that the audience are also noticing that you're really into it and losing yourself, and they really like to see that."

What would you say was your best ever live experience?

"That's a tough one. We played in Chicago with Unknown Mortal Orchestra, and I think having grown up listening to so many blues greats from Chicago... I don't know whether the aura of being in Chicago and actually playing a gig there for the first time maybe made the venue even better, but the venue was entirely wooden. Wooden floor, and sort of like wooden rafters and, I don't know, just something really felt magical about it, and the crowd were really responsive."

We had to drive from Stockholm to London after a gig once, which was an amazing piece of planning [laughs]. It took about 21 hours' drive or something. And we ended up on this service station that was basically a boat: it just looked like any normal services, but it was floating.

"So we drove onto this platform, and then the sat nav was moving up and down. We were like, 'Are we on water or what?' I think we were all too tired to realise what the hell was going on."

What's the strangest thing that's happened to you on tour?

"We played the Ino-Rock Festival in Inowroclaw, Poland, and arrived really late in the night. The contact who met us at the airport bundled us into the back of a beaten-up Transit and we drove the three hours to the site. It was great, they had loaded the van with loads of pizzas and Polish lager to drink, and after an hour and a half we were comfortably fast asleep.

"Suddenly, the driver, who didn't speak any English, veered sharply off the main road and down a dirt track into a wood. After a mile or two, he made us all get out in a clearing, and as the full moon shone down on us, we all looked at each other and thought, 'Well lads, this is it... this is how it ends.'

"He then went over to the other side of the van, and shouted 'Piss stop!' and laughed manically as he relieved himself against a tree - knowing full well he had scared us witless. And then, in pidgin English, he explained, 'I do this to all the bands'..."

"I'd have to say it's by far the Boston Tea Party by Fleetwood Mac. Is it 1969 or something? I can't remember. Anyway, the Peter Green Fleetwood Mac Live In Boston album, when they do a sort of 25-minute Rattlesnake Shake.

"Also, I don't know if it's from that gig but he does a solo in Jumping At Shadows that is just beyond compare: I don't know how any human could play guitar so ferociously and beautifully at the same time."

Fain by Wolf People is out now on Jagjaguwar Records