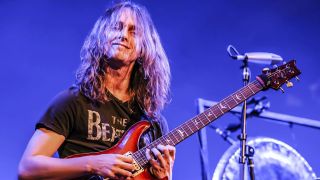 What was your first ever gig?

"My first ever gig was a local nightclub when I was 16 and it was with my first band called Gallifrey, after Doctor Who's home planet. There were probably about 20 people there. We put the gig on ourselves, but it was pretty uneventful, to be honest. The band was all into Nirvana stuff and I was the shred guitarist. I tried to add some Steve Vai influence to their Nirvana powerchords."

"If we do something in Europe, I'll usually end up using borrowed amplifiers - my preference these days is anything from the Peavey Classic series. So, basically, my guitar sounds just come from the amplifier and I don't use a distortion pedal; I don't really like the way that it colours the sound of the amplifier. If I need to push it, I'll use a Dyna Comp for a lead sound.

"With Carl's band, I have to try and emulate keyboard sounds and so a big part of that is the Whammy pedal for the portamento and all the different harmonies. I use an Electro- Harmonix POG2, too, which is great for all the keyboard sounds and I have an Eventide H9 in my effects loop that handles all of my reverb and delay settings. I've just got an endorsement with Eggle - they've just built me a 24-fret LA and so I've been using that on some tunes as well."

"I broke my heel during a drum solo - that was quite Spinal Tap. I was having sound issues and I had to keep going and speaking to the sound guy. During the drum solo, everyone was at the front of the stage and so I thought, rather than squeezing past this big group that's blocking my access to the backstage, I'll just jump over the barrier.

"Much to my surprise, the drop on the other side of the barrier was a lot further than I thought and I ended up fracturing my heel and tearing the ligament underneath my foot. I had to get up and play Hoedown after that with a fractured heel - and it involves having to do octave sweeps on the Whammy pedal…"

What's the best venue you've played in from a musician's point of view?

"There's a venue in the Netherlands called The Boerderij, it's one of the main venues in The Netherlands. I played there quite a few times with Carl and with Neal, and the other month, I played there on my own with the GB3 Project, which is myself, Dave Bainbridge from Iona and Dave Brons. It felt pretty special to go there and play there with my own project and not as a hired gun."

What is the worst journey you've had either to or from a gig?

"We used to do a lot of fly in/fly out dates. Once, we had this horrific journey of early flights and delays and then, because of the connecting flight, they lost our luggage - pedalboards and everything.

"We had to drive out to the middle of nowhere where this gig was and basically tried to beg, steal or borrow any gear we could on the way. We turned up at this outdoor festival and there had been a big storm during the night and the stage had just been obliterated, so the gig was cancelled."

Which airline, from a musician's view, do you find easiest to travel on?

"I think the best, in my experience, has been BA, from the point of view that they've actually seen me with a soft case and asked me to board first, because I've got a guitar and they want to make sure it gets on okay and because I'll need extra time putting it in the overheads."

"I try to have lots of communication with the audience when I'm playing: lots of eye contact, lots of facial expressions. When I taught, I quickly learned the best way to teach a class full of people wasn't to have the attitude 'I'm the teacher, you're the student'; it was more, 'Here we all are, let's work together to do it.' I think it's the same with an audience; we're all here together, I'm not performing at you, we're just enjoying this experience together and you're as much about the experience as I am."

"Nothing in particular. I noodle around backstage sometimes, but I don't really place much importance on warming up. Sometimes, we'll go on and I've not played at all that day."

"I think perhaps the one album that had the biggest influence on me was Van Halen's Right Here, Right Now. A friend gave me a copy on cassette and it just absolutely blew my mind. I've not actually listened to it for years, but I learned so much from that album. I learned Eddie's solo spot and a lot of the riffs and solos."