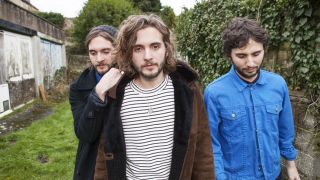 These men are definitely related

Intelligence: Rock history is littered with famous, often warring siblings, from Ray and Dave Davies to the brothers Gallagher. If two relatives in a band is a recipe for disaster, then the future should be nothing short of incendiary for The Family Rain, the Bath based three piece with a fine line in crunchy guitars and classic rock style featuring twins William and Timothy Walter and their older brother Ollie.

"Ollie picked up the guitar when he was 15 and wanted a band so got his brothers involved," says William. "We learned a couple of covers and went off looking for places to play. We started to play in bands together about 8 years ago, but the bands always included at least one other member as well as the three of us. The Family Rain started early in 2011."

Making the band exclusively a family affair was a smart move for the Walters, who signed to Mercury after sparking an industry rush with debut release Trust Me, I'm A Genius, a pounding slice of blues rock full of massive guitars and distorted vocals.

"It's great to be considered as a buzz band this year and we're looking forward to getting out there and showing people why we have that label," says William. "There seems to be a lot of bands with a bigger hype around them than us, so we're not feeling the pressure too much, as least not as much as others might be..."

Wrenching a colossal blues rock stomp from their sparse set-up, the band's full on live show hasn't hurt their burgeoning reputation. "[We're] pretty damn heavy," says Timothy. "People often comment on the size of the sound we get as a 3 piece. We like to go for it on stage, having played with and seen a lot of bands who think that standing still and playing is enough. It's always worth remembering that you are the entertainment for the night so it's your job to put on a show."

2013 is shaping up to big a big year for The Family Rain, who are currently putting together their debut album at a legendary German studio. "We are in the studio right now as we speak, Hansa studios in Berlin to be exact," says Ollie. "We are in the process of recording our debut album with Jim Abbiss and it's sounding huge!"

Further action: Connect with The Family Rain on Facebook, or check out their official Tumblr.