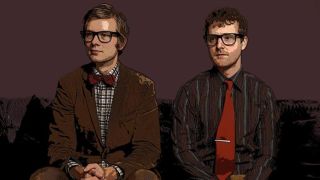 Intelligence: Some bands seem to arrive fully-formed, with a unique sound from their first release. Such is the case with Public Service Broadcasting. With samples filched from newsreels and BFI films, frenetic guitar, twanged banjo and absolutely no lyrics, their distinctive sound is both musty and thrilling. And they're popular - it's becoming increasingly hard to tune into 6 Music without hearing them.

“I've been playing since I was about 14, in various guises,” says frontman J. Willgoose Esq. (possibly not his real name). “I was working my way through various things that were either too indulgent or too long.” The inspiration for PSB came while listening to Radio 4 - surely the ultimate example of real public service broadcasting - one day. He started mining BFI films for samples, and was delighted when the institute gave their blessing. “The BFI have been absolutely fantastic to us from the first time I phoned them up," he says. "They were really supportive and accommodating. Studio Canal as well."

With a brace of tunes in progress, it was time to go public. "I started playing live without any visuals. It seemed to go down well, but I had a slightly sort of scattershot approach. Then I started playing with Wrigglesworth [PSB's drummer - definitely not his real name] and the reaction increased. People started to seem to really enjoy it.” That was “around two years ago” and the band swiftly picked up management. “As soon as people with an actual plan came on board we started doing alright,” he says, ruefully.

The band's debut album, Inform - Educate - Entertain is released in May - and it's great. Building on the promise of it's early singles, 'Signal 30' and the moving 'Everest', it expands their sonic palette, incorporating hip-hop and eighties electronica. But for an album that will likely do extremely well, it had a fairly low-key creation. “I do most of [the recording] at home,” Willgoose admits. “I have the back end of a garage, which is very cold.” The drums were recorded “properly”, in Mogwai's Castle Of Doom studios. “They were done in a good room, because you need to do that, really.”

Do they feel any pressure to live up to the hype machine and being a 'buzz band'? “No,” says Willgoose. “Because if there is any buzz about us - and I kind of refuse to believe that there is - it's not been artificially generated. It's all been very organic and natural. We've had great supporters - 6 Music, in particular. Radio play has a massive impact. It really makes a lot of difference.”