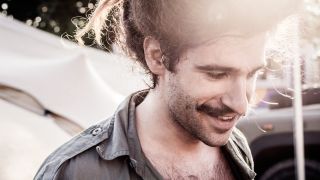 Intelligence: "I don't really remember being alive before 15," King Charles tells MusicRadar matter-of-factly. "I remember living, but I didn't really wake up until I was 16. [Until then] I was playing the cello, I was only listening to classical music, and it's not like I was going out and partying to Rachmaninov."

This is how King Charles talks, like a weary Wildean aristocrat - almost too blue-blooded to breathe. It's a front, partly - despite the fact that he speaks with the ingrained accent of the British private school system - although it's one that seems rooted in his soul and is only magnified in his on-stage persona.

Essentially, King Charles is the Lady Gaga of folk rock. A true pop eccentric combining folk traditions with joyous pop hooks and afrobeat rhythms, he's an Adam Ant for the Mumford & Sons generation. It's not so surprising then that he shared his schooling with Winston Marshall of that very band - he says both of them were "set alight" by Bob Dylan at the age of 16 - and has since supported them on tour in the US.

"We both fell in love with country music at the same time," he explains. "We'd play the same places together and try and work out how we were going to avoid the normal trajectory of a young man's life."

While Mumford have stuck rigidly to folk music in its barn-dancing, banjo-twiddling guise, King Charles has trodden his own path.

"I don't like thinking of folk music as a style or a sound," he says. "I think it's about being music for the people. That's what I want to take from Bob Dylan, talking about things that as a generation we can all share in common."

For the most part, that's love, and the ideal of true love, according to his lyrics. But what makes King Charles particularly listenable is his ability to pluck elemental pop hooks out of thin air and leave them dangling on your frontal lobe. Just check out tracks like Love Lust, Bam Bam and Lady Percy, to see what we mean.

A multi-instrumentalist, Charle's current obsession is drums "for the release of emotions and energy", but Bob Dylan is the passion that he'll always come back to and the artist is still his driving force.

"All I ever wanted to do was learn Don't Think Twice, It's Alright exactly how he did it," the King tells us, slightly morosely. "I still can't play it properly!"