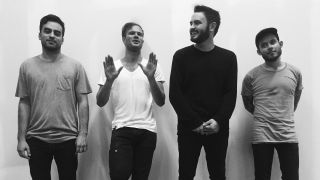 Sometimes a song comes along that makes you want to put your head through plasterboard - in a good way. By that token, Your Clothes by New Jersey punks Can't Swim has set this writer's house refurb back a bit…

At the heart of the project is Chris 'Krier' Loporto, a career drummer who has only been playing guitar for 18 months.

"This was just something I was doing as a hobby," he confesses. "A buddy left his Ibanez in my apartment and I started messing about with it - and that's actually the guitar I still play today."

Chris was also brand new to songwriting and it's pretty incredible that his fledgling efforts - the five bombastic, immediate adrenaline hits that form debut EP, Death Deserves A Name - are this knockout-good.

"You've just got to trim the fat off and realise where you lose the listener. A trick I've found is just playing it for friends and watching their reactions, if once that second verse is coming round you're losing them, you think, 'Ah shit, we've gotta change it up!'"

Drumming's loss is definitely guitar's gain. "I can see that the songs are more rhythmic-based than melodic-based," reflects Chris. "But other than it's just way less sweaty as a guitar player, so that's good!"