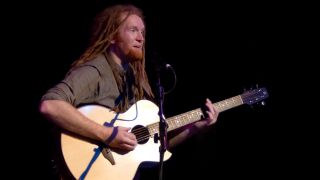 The Surrey savant reveals how to record percussive acoustic, why he still takes guitar lessons and what the hell he was thinking in live streaming the entire recording process for his fourth album

Surrey-raised singer/songwriter Newton Faulkner's entry to the upper-echelons of chart land came in 2007 with Hand Built By Robots, an album of monolithic pop hits that showcased a complex percussive acoustic guitar style.

The 28 year-old's 'eight things at once while making the tea' guitar technique has always formed the core of his songwriting and live sound, but follow-up albums (2009's top-three-charting Rebuilt By Humans and 2012's number one Write It On Your Skin) have seen it obscured by extra instrumentation. Now, holed-up in his home studio in East London, Faulkner is making a fourth album, Studio Zoo, that places the acoustic at the forefront, with almost every sound generated by acoustic guitar or vocals.

As if that wasn't challenging enough, he's also opted to live stream the entire recording process to the world (hence the title), meaning that his legions of fans have all become de facto producers.

We headed down to the Studio Zoo itself to discuss recording tips, living life through the lens and the resulting mental state…

You're live streaming the whole album recording sessions. Why?

"The more I think about it, the better it gets as a concept. There's always been a strange lack of correlation between the different elements of the stuff that I do. The radio singles were one thing, the videos were a different thing and the live shows were a different thing to the other two, and then interviews were like a different character again, so it was just about finding a way of putting it all in one place."

What was your initial reaction to the idea?

"Kind of a mixture of fear, trepidation and mainly fear. And that hasn't gone! But it's been amazing for me… I've had feedback on every take. They'll be like, 'I like that one!' Or 'That one's a bit weird!' Or 'Maybe take a break…' That was one of my favourite comments that came in. I was sitting there just [mumbling] 'I must get the vocal! It's three o'clock in the morning. I must get the vocal!' And I get, 'Go to bed' - and they were right."

Which songs are you most excited about?

"There are loads of really good collaborations. I've worked with lots of really amazing people. Like, on Orange Skies I've got Thomas Leeb doing the counter guitar part. He's my favourite guitarist in the world. He was the first person that I ever heard in the style that I now play in all of the time. He's an instrumental acoustic artist and to have him sending parts in has been mind-blowing."

What other guests have been involved?

"Nick Harper came in and did some amazing stuff [on At The Seams]. I just used his whole take. He sent it through and was like, 'Just hack it up' and I was like, 'No!'

"That song's also got the highest note I've ever sung. People logged on just as I was doing that bit and I got a tweet from someone of just laughter. I was like, 'Thanks!' I haven't auto-tuned anything on the whole record. Most of it is whole takes and, again, it's partly because of the cameras. I want to spend as little time editing and as much time playing as possible."

Has it pushed you in terms of your ability as a guitarist?

"This album is the most guitar-y thing I've ever done. The first album was kind of half way there, but it was no way near this level. We decided very early on to completely rely on the guitar. I got the sound right in here [my studio] and I was like, 'Actually, you could definitely do a record with just guitar with this sound.' With the guitar sounds I've had before, it just didn't take up enough frequencies, it was a narrow band in the sound. Whereas here it's nice and wide, there are all kinds of harmonics and it just sounds full."

Newton performs It Must Be Love live at his studio.

You're a very complex player. What techniques have you learned lately?

"I've been doing the tuning thing a bit recently, where you're tuning while playing harmonics at the same time, so you're playing melodies with harmonics. The harmonics give it such a pure kind of sound. You can't really slide harmonics, so it's such a pure tone and when you move it just sounds slightly wrong, but in a really cool way. Especially when you do it with[in] chords."

How do you stop yourself from going over the top with technique?

"I think technical things are perfectly valid as long as there's a tune behind them. I kind of just let the songs be the songs really. If I was doing instrumental stuff it would be very different, because you can really push. There was talk of me doing an instrumental album at one point, which I would love to do, because it would push my playing up a notch. This album has done that to a certain degree because it's allowed the guitar to not only be the backbone of the track, but also all of the production has to come from the guitar. It's been really interesting, but really challenging."

What are your main guitars for the album sessions?

"I generally switch between two/three built by the same person, Nick Benjamin. My oldest one is my main recording one. Then there's one that's basically a re-make of it, because the original can't fly anymore as it's got that many cracks in it -most of the inside is now glue. Then there's a baritone, which is like a giant version of them. It goes a tone and a half lower than a regular guitar and it's got massive strings on it - it's like a .72 on the bottom - but it's got a really nice, round sound to it. I used that on Orange Skies."

What kind of things do you spec when you're having a guitar custom made for you?

"When my main one was built for me, I kind of took in my guitar, which was an Ovation 70 Deluxe at the time, and I said, 'This is the kind of stuff I'm doing.' And he was like, 'OK, so it needs to be able to go really low, it needs to be able to take a bit of a battering.' After that I've needed a baritone, back-ups and a couple that will stay in standard tuning."

Could you take us through the basic recording process? How do you build a song?

"I'm using Pro Tools 10.5, so I have a template ready and everything that I need is already setup. I open up a file, I find the tempo and then I'll go through all of the guitars and get the backbone of the track in place. Then I'll put a guide vocal down with this really lo-fi mic I have. So it's guitars, guide vocal, main vocal and just see what else it needs. I've banned myself from playing two guitars at the same time on the record, so I've been like, 'If it needs something else, we'll get someone else.' I haven't even harmonised with myself. I've tracked other people's harmonies a little bit for thickness, but at no point is there a big block of 'approximated me' vocals."

Your style of acoustic playing is tricky to capture in the studio. How do you mic your acoustic when recording?

"I've got an SE Gemini II, which is really good for body. So the Gemini II is doing the bottom end and the details of the hand-hitting thing, then I've got a Gefell M300 [cardioid condenser mic] which is doing the details of the other [fretting hand] end and is quite toppy and precise, then you combine the two together. I've also got two Coles [4040 Studio Ribbon mics] further back [in the room]."

Do you have any other tips for recording percussive acoustic guitar?

"I think a lot of it is the room. If you're doing it in a completely dead room, which this isn't, you don't get that solidness. If it's completely dead then [percussive acoustic] hits are very quiet. You need the space for it to do its thing. If its too big then it's really echo-y. I think room mics are good as well, because then you get that kind of 3D sound."

You're openly displaying your writing/recording process for Studio Zoo. Are you worried about losing that sense of mysticism?

"No, I think there's enough of that going on. One of my favourite things that's been coming back a lot is people saying, 'After watching this, I've been inspired to go and make my own music', which is a really amazing thing. You don't really do that if you're trying to be a deity, then you're just making people go, 'Ooh! Untouchable!', which I'm not. I'm a dude in a small room playing loads of guitars, not really knowing what's going on, shouting at the computer."

You can check out Newton recording live at Studio Zoo, and for more information visit the official Newton Faulkner website.