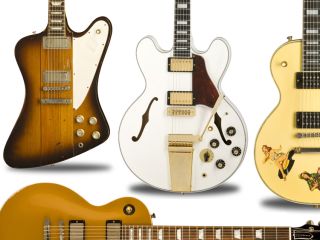 No matter how much we idealise about wanting to carve our own unique furrow as aspiring musicians, the thought of owning a guitar that's just like the one our hero plays is pretty cool, right?

It's certainly a theme that most of the major brands have exploited over the years and Gibson's Inspired By series is currently doing very good business indeed.

Saluting some of the most influential guitarists ever to strap on a six-string with the Gibson logo and erm, Kiefer Sutherland, the Inspired By instruments are limited-edition pieces built to the exact specifications of the players in question.

The latest crop contains some very special guitars indeed, so without further ado, here's the class of 2008:

Not to be confused with Mick Jones from The Clash, Foreigner's Mick Jones went five times platinum in 1977. His original Les Paul Custom is recreated here, and features a one-piece solid mahogany body, '57 Classic pickups, aged hardware and an aged finish.

Lifeson's 1976 ES-355 has been his main weapon of choice throughout his career in Rush. This recreation sold out in record time and demand for another run is high.

The Holy Grail for punk fans of a certain vintage, complete with pin-up girl stickers. Get pissed, destroy…

From punk to jazz now, and when Ritenour isn't busy collecting one of the 17 Grammy nominations he's received to date, he's playing fluid jazz on a lovely old ES-335. This recreation's first run also sold out quickly.

He's one of the hottest blues guitarists on the planet, and Bonamassa's signature guitar is pretty damn good too. Can we have one please?