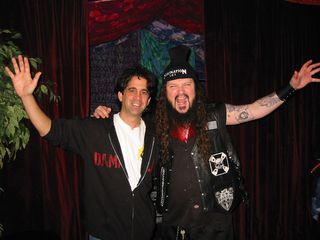 Dean and Dime in happier times

Dean Zelinsky, who in July 2008 quit the Dean Guitars company he founded, is to launch a major new venture. His DBZ guitar company is formed in partnership with Diamond Amps owner, Jeff Diamant.

Zelinsky founded the Dean Guitars company in 1976 at the age of 18. He later sold the company, but rejoined the business in 2000.

Despite much commercial success in the noughties, Zelinsky left in July saying: "I wanted to get back to what put Dean on the map originally - building high-quality instruments that shape both the image and tone of guitar players, from the beginner to world-class professionals."

He added: "I can no longer attach my name to the reputation, quality and direction of Dean Guitars or its current objectives."

Dean Guitars' current endorsee list is impressive, particularly in the world of metal. There are signature models for Megadeth's Dave Mustaine, Trivium's Corey Beaulieu and Matt Heafy and a long-running and extensive line of Dimebag Darrell signature models.

The DBZ brand will launch at the NAMM trade show in California in January 2009.

"DBZ Guitars will have my personal control over design, direction and quality," says Zelinsky.