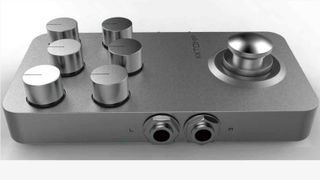 NAMM 2015: Hotone audio is making some bold claims for its Xtomp, an iOS integrated pedal making its bow at NAMM 2015.

While other modelling pedals like Eventide's H9 and Zoom's MS-100 BT have already reached the market, none can yet boast a library as extensive as Xtomp's 300 wirelessly loadable 'classic and modern' presets.

Hotone also trumpets its dynamic modelling algorithms as audibly superior to its competitors' static presets. We'll let you know if Xtomp sounds as good as Hotone claim as soon as we get our hands on one. In the meantime, for more info read on or visit the Hotone website.

XTOMP PRESS RELEASE: Xtomp is an ultrathin effects pedal stompbox that simulates all kinds of iconic classic, vintage, and modern pedals through its growing effects library of over 300 models. Xtomp uses an iOS app to manage all your effects and transfers them to your stompbox via Bluetooth.

This powerful pedal lets you get creative by giving you access to both modern, cutting edge units and rare, out of production pedals of lore. At any given time, it is always that "one" pedal you need:

Hotone's new Comprehensive Dynamic Circuit Modeling (CDCM) system technology, which processes various incoming signals dynamically, is unlike current modeling systems which use the same modeling circuit regardless of the signal. CDCM allows for larger andmore complex modeling algorithms, which equals more realistic and natural tone. There has never been anything like this in tone modeling before! www.hotoneaudio.com

Have you ever wanted to get a classic effects pedal but just couldn't afford it? Or searched the depths of eBay but couldn't find that vintage pedal you're after? Are those sounds only available in your classic record collection, never to be enjoyed by your own guitar? Isn't there any way to access those righteous effects?

As early as 2001, the Hotone team was brainstorming on how to model those old classic pedal and amp tones. The brainstorming turned into a complex and drawn out research based technological pursuit. Even as other companies were developing tone modeling,

Hotone was set on answering the question of how to get tones just like those original products. The majority of mainstream modeling methodology is based on certain circuit theory analysis modeling algorithms.

These algorithms can successfully model a circuit's characteristics in static state, creating tones close to the original sound. But the catch here is the "static state." The characteristics of static circuitry hardly ever reflect a circuit's dynamic performance, and thus only ever come "close" to the modeled sound; they are never indistinguishable.

Now in 2015, Hotone is showing off the new era Xtomp, the fruit of a decade of circuit modeling research and development, which employs our very own Comprehensive Dynamic Circuit Modeling (CDCM) system. CDCM has constructed an extremely complex dynamic variation matrix, able to realistically express every detailed change that occurs during the operational process of actual circuitry.

That is to say, as Xtomp is operating, the models at work within it are constantly changing rather than remaining fixed. This matrix will adjust its own modeling parameters and even framework based on the instrument input signal range, signal frequency, knob position, the instrument's own impedance, and other variable parameters, all to achieve the closest possible characteristics of actual circuitry.

In order to capture the most meaningful tones, Hotone spent most of its resources in obtaining those classic effects which have long since disappeared from the market.

Even as most of the original casings are but a shadow of their former glory, with their circuitry intact, the tones they produce have only become more coveted with time. And here we'd like to thank everyone who lent their vintage effects to our modeling research. Each tone found in Xtomp was meticulously tested, measured, and compared by the Hotone team to guarantee it's likeness to the original. www.hotoneaudio.com

Xtomp is an ultrathin effects pedal stompbox that simulates all kinds of iconic classic, vintage, and modern pedals through its growing effects library of over 300 models. Users can update and even contribute to the library.

Xtomp uses an iOS app (Android version coming soon) to manage all your effects and transfers them to your stompbox via Bluetooth.

Musicians of all kinds love simple-to-operate gear. It lets them focus on the fun of making music. With that in mind, Hotone partnered with world-class mobile music software giant EUM Lab to develop a smart but simple user interface: all you have

to do is go in, find the pedal model you want, and put it in the Xtomp with the touch of a button. Adjust the Xtomp knobs to your liking, and you're ready to rock.