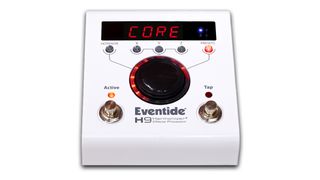 The H9 allows players to access Eventide processors such as the H910 and H949 Harmonizers and other Eventide effects (including the UltraTarp Delay and Resonator) via a one-knob interface.

The pedal is controllable from its front panel, and a free editor/librarian program, H9 Control, can be downloaded to Mac, PC, or iOS device.

The H9 Control app can then be used for live editing, creating and managing presets, and changing system settings. The pedal also connects via Bluetooth to iPods, iPhones and iPads for wireless live control.

Today, Eventide unveiled the newest addition to the acclaimed H9 stompbox line: H9 Core. Available now, the H9 Core delivers the legendary sounds of Eventide's H910 and H949 Harmonizers - the prized studio processors used on stage by such luminaries as Frank Zappa, Jimmy Page, and Eddie VanHalen. All of Eventide's stompbox effects, including new H9 exclusives, UltraTap Delay™ and Resonator, can be added to H9 Core.

H9 Core features a simple, one-knob user interface and is fully-featured as a standalone stompbox. Using H9 Core with the powerful H9 Control app for Windows, OSX (via USB), or iOS (wirelessly via Bluetooth), makes creating and managing presets, live control, and in-app algorithm purchases easy. H9 owners can sync up to 5 H9s to a single Eventide.com account so their H9 algorithms can be used by 5 H9s simultaneously.

"The un-bundled H9 Core is the perfect add-on for an H9 owner," said Ray Maxwell, Eventide's VP of Sales and Marketing. "Alternatively, H9 Core is a great place to start for users who want to customize their H9 with only the algorithms they want at a lower price of entry."

All of Eventide's stompbox algorithms and their associated presets are available for audition and in-app purchase through the H9 Control app. Drag and drop presets into custom preset lists for your upcoming shows.