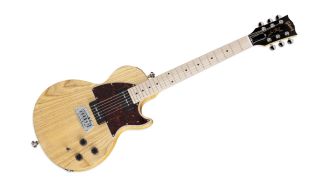 Prepare to give that B string the bending of its life

An Ash bodied, P90 sporting solid body, this is a guitar that has been built with country players in mind, and looks as beguiling as it sounds.

The “B-Bender” has been an essential part of the Nashville sound ever since legendary guitarist Clarence White and drummer friend Gene Parsons installed their wild new invention, a B-string bender operated by pulling down on the strap button, in White´s old guitar back in 1965. The B-Bender gave guitarists the ability to imitate pedal-steel bends mid-flow on a standard guitar, and broadened the country vocabulary enormously. In the early 80´s Joe Glaser developed a new style B-Bender that was only installed at his personal “shop of the stars” in Nashville. Now Gibson and Joe Glaser combine forces to bring the Music City Jr. with B-Bender a new look, voice, and feel to the world of faux pedal-steel bending, in a guitar fully equipped to pull off these impressive tricks, while loaded for fat, driving Gibson P-90 tone—along with coil-tap switching to access brighter single-coil tones. The Music City Jr. with B-Bender is constructed in the full Gibson tradition, with a 24 ¾” scale length, a glued-in neck, a 12” fingerboard radius, and a 1 11/16” neck width at the nut, but it incorporates crucial elements from traditional B-Bender guitars such as a light ash body, a maple neck and fingerboard, and through-body stringing courtesy of a converted Gibson Nighthawk bridge. The result blends elements of classic twang tone with Gibson´s legendary thick, rich voice. To top it off, it´s superb to play and adaptable to a wide range of musical styles.

Legendary for its gutsy lows, punchy midrange, and silky highs, in addition to its comfortably light weight, ash has been acclaimed as a tone wood for more than six decades. The Music City Jr. with B-Bender begins with a body of solid Grade-A ash, which is crafted in the shape of the single-cutaway Les Paul Jr. and Special, and minimally routed to accept the lightweight bender mechanism and through-body bridge. The guitar is in Antique Natural vintage gloss, to beautifully show of the distinctive grain of this wood. A distinctive tortoiseshell patterned pick guard beautifully tops off the visuals. A solid maple neck is glued in in traditional Gibson style, carved to a fast, slim ´60s profile that measures .800” deep at the 1st fret and .875” at the 12th, and topped with a Grade-A fingerboard with 22 medium-jumbo frets and black dot position markers. The secret weapon in the package is a lightweight B-Bender mechanism hidden within the back of the guitar´s body: put downward pressure on the guitar so the strap pulls the neck-end strap button upward, and an internal lever-and-gear system bends your B string anywhere from a half tone to a full tone sharp, as determined by the player. With a few simple changes it can be a G-Bender, and a set of high-quality Grover™ tuners make tune-ups a breeze.

While the stirring, energetic B-Bender sound has long been a classic element of “hot licks” country playing, you´ve never heard it with a tone as thick and meaty as the Music City Jr. with B-Bender delivers. Two of Gibson´s fat, growling P-90s yield a sound beloved by guitarists since these iconic pickups first hit the scene in the pre-rock´n´roll days, but this guitar holds further surprises: lift the push-pull switch on either pickup´s volume knob to access a coil tap that bleeds off a portion of the P-90´s coil windings, accessing a brighter, snappier tone more reminiscent of thinner single-coil styles. Between this switching, the independent volume and master tone controls, and Gibson´s classic three-way pickup switch, the Music City Jr. with B-Bender is packed with a tonal versatility that belies its outward simplicity, primed for blues, rock, jazz, or—yep—country. Check it out now at your authorized Gibson Dealer, and bring a new breed of twang to your arsenal.