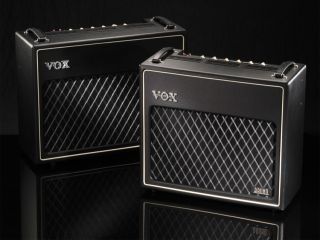 Tony Bruno is a highly respected and sought after boutique amp designer from the USA. Throughout his esteemed career, Tony has hand-built over 1000 amplifiers, some of which are regarded as among the finest sounding amplifiers in the world. And Tony Bruno is no stranger to Vox.

A Long-time friend of Vox R&D, Tony's unparalleled knowledge of boutique amplifier design has been called upon many times by Vox, on projects including the 1990s era 6-input Hand-Wired AC30, the Vox Night Train and the Custom Series amplifiers.

After establishing a strong working relationship with Tony Bruno, Vox decided it was time to embark on a full collaboration and allow Tony to design a circuit that we would put into production - a first for both Vox R&D and for Tony Bruno. So, combining Tony's expertise of both vintage and boutique amplifiers and Vox R&D's resources and development team, we set sail on the seas of tone, into unchartered waters.

First, Tony personally built and hand-wired a prototype that met his uncompromising standards. This amp would be used as a benchmark that we were able to continually reference throughout the project. After our initial evaluation, we at Vox R&D made a replica of the unit using a PCB design instead of Tony's usual hand-wired method.

We then unleashed Tony onto the new sample and allowed him to modify and add new features to suit his taste. After many rigorous voicing sessions with Tony, it was agreed we had something that not only shared the same excellent tonal quality of the original unit, but also included features that would otherwise be impossible to create without the use of Vox R&D's modern development and production resources.

These TB35C1 and TB35C2 amplifiers are the result of this uncompromising collaboration between Vox R&D and Tony Bruno.

The Vox amp for the player with "Stateside" tastes

Despite their British Vox pedigree, the TB35C1 and TB35C2 amplifiers have a decidedly American feel, thanks to Tony's influence and design. The all-tube chassis features a quartet of 6V6 power tubes, known for their smooth and clean high end, creamy mids, big bass, and for their rich "breakup" when overdriven.

The preamp stage is driven by three 12AX7 preamp tubes, plus an additional 12AX7 paired with a 12AT7 tube to drive the reverb unit. Together, they create a distinctive sound familiar to fans of American Blues and Country music.

The single-channel preamp offers both High and Low level inputs, as well as Volume, Bass, Middle, and Treble controls. External speaker jacks and extension cabinet jacks are standard equipment on both models. The TB35C1 and TB35C2 are equipped with Celestion G12-65 loudspeakers, all mounted into rugged birch-ply cabinets.

Tony's design for the TB35C1 and TB35C2 amplifiers included a number of unique features designed to maximize every tone-tweakers satisfaction, in any playing situation.

The Macho switch provides a boost to the mids and overall gain. This all new, specially-voiced Bruno mod is ideal for players who want to keep their amp tone pure and organic, while allowing their leads and solos to truly soar, without requiring any additional pedals!

Footswitchable during performance, players can also leave the Macho switch permanently activated to dramatically change the sound of the amp, and to allow the user to take their search for tone even further.

The Bass Boost does exactly that; it boosts the bass! Turning the Bass Boost on enhances the warm and round low-end tones coming from the instrument. This setting is ideal for a rich, full sound.

The addition of a Master Volume control allows the Vox TB35C1 and TB32C2 amps to achieve a full-on sound at different listening levels. For the purist, the Master Volume bypass switch removes the Master Volume from the circuit path, delivering a direct and pure high-gain tone, and allowing the amp to run flat-out for those who want to make the walls shake!

Players who crave the unmistakable sound of a 1960's spring reverb unit will not be disappointed. Each of the TB35C1 & TB35C2 amps is equipped with a tube-driven reverb with a premium spring reverb tank.

This all-tube design is defined by a custom-built transformer and a high quality spring reverb tank, able to go from a subtle shimmer to long "Surf-style" decay - and all points in between - while always maintaining the amplifier's winning tube tone.