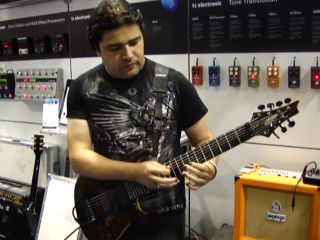 NAMM 2011: Last week we told you about Tiago Della Vega, the Brazilian guitarist who broke his own record by playing Flight Of The Bumblebee at a mind-numbing, fingers-crippling 340 BPM. (His previous record, listed in Guinness World Records, was a still-dizzying 320 BPM.)

Well, we've got some once-in-a-lifetime video for you above. Appearing at the TC Electronic booth, running his guitar through a battery of the company's effects pedals and an Orange Amps Tiny Terror combo, Della Vega stunned the assembled crowd by playing relatively slowly! OK, truth be told, he did shred at times during the scorching power-rock ballad, but watch closely - this might be the only time you see the 'world's fastest guitarist' take things down a notch.