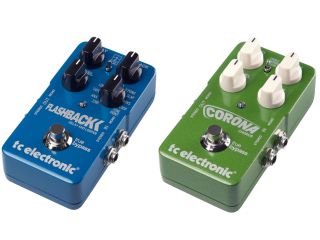 NAMM 2011 PRESS RELEASE: TC Electronic introduces seven amazing guitar pedals that deliver first-class tones right out of the box, featuring a true bypass and analogue-dry-through design that guarantees maximum tonal integrity and ultimate clarity. On top of that, five of these new pedals let users play with unique tones created by some of the world's greatest guitar players.

TC Electronic believes in moving the possibilities of guitar forward, and the five pedals mentioned above - Corona Chorus, Flashback Delay & Looper, Vortex Flanger, Shaker Vibrato and Hall of Fame Reverb - feature a new and ground-breaking concept called 'TonePrint' that gives users instant access to the sounds of their favourite guitar heroes. A TonePrint isn't just a static preset, it's a complete re-tuning of the pedal, including the sound and how the pots react - everything that makes a pedal unique.

TC Electronic has collaborated with some of the best guitarists in the world - such as John Petrucci, Ron 'Bumblefoot' Thal, Joe Perry, Orianthi and Doug Aldrich - to create the first batch of TonePrints. However, that's just the beginning - the list of contributing artists will expand massively in the future. Forget emulation, let's talk collaboration!

Dark Matter Distortion is all about that powerful, super-musical roar of an early plexi - a sound that will satisfy even the pickiest players. From cleans with an attitude and warm, bluesy tones, to a crunch with grit and fully saturated lead sounds full of harmonics and overtones, it's all there in spades and instantly available by riding the guitar's volume knob.

MojoMojo Overdrive will breathe life, magic and that certain something into any sound. Guitarists everywhere are always looking for that little extra push over the cliff, a touch of extra bite, body and tone. MojoMojo Overdrive will add that flash of perfection, providing a crisp and clear overdrive with a rock-solid bottom end. Quite simply, MojoMojo Overdrive is like adding another channel to the amp, and it will sound like it always belonged there.