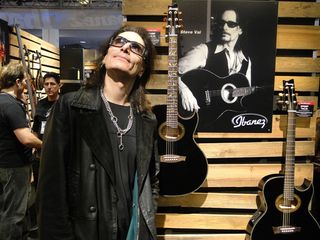 NAMM 2011: Steve Vai walks into a makeshift conference room at the Ibanez NAMM Show booth, spots a bowl of candy on the table and says what you would expect any big-time rock star to say: "I want a Tootsie Roll!"

It's been a busy morning for Vai. After unveiling the latest edition of his gorgeous signature acoustic-electric, the Ibanez Steve Vai Euphoria model, he spent over 90 minutes signing autographs for a ridiculously long line of fans who stretched around the company's showroom real estate and snaked down and around various aisles. Guitars, CDs, posters, T-shirts, you name it, Steve signed it. And in just a little while, he's due at the Carvin booth to repeat the process. If Carpal Tunnel Syndrome isn't already a problem, it very well could be by the time Vai leaves the Anaheim Convention Center at day's end.

Even so, the guitarist was gracious enough to spend a half hour with MusicRadar during a break in the action. As Vai unwrapped that lusted-after Tootsie Roll and satisfied his sugar craving, we decided to spring a toughie on him:

First things first, and actually, this might be the most important question of all, Steve: Why'd you lose the goatee?

[laughs] "Start with the hard-hitting ones. [laughs] I love it! Well, you know, I rarely experiment with facial hair, but I wanted to try it. I enjoyed the goatee. But I went to see my mom, and she wouldn't let up on me about it. She didn't like it at all. Plus, my wife wasn't too crazy about it, either. She said kissing me with the goatee was like kissing a Brillo pad. Besides, I thought I was starting to look like Steve Vai's evil twin or something. So, off it went."

"Steve Vai's evil twin" - I like that. OK, let's get into some music here. Recently, you finished performing your first symphony during a Steve Vai Festival in Holland. How was the symphony experience for you? Also, what's it like to have your very own festival?

[laughs] "You know, I've been very fortunate, and I'm especially fortunate to have had a supporter in Holland who's been in radio during my entire career. As a result, I'm very popular there. The Dutch are very artistic, honest and practical people - very open-minded in so many areas.

"As for the symphony… I've written a lot of pieces that could be considered 'symphonic,' but I'll be honest, I'm not a big fan of the word 'symphony' - at least when it's applied to me. [He gestures dramatically] 'He wrote a symphony!' I don't know… It's too conventional sounding to me. But I do enjoy composing, so when this opportunity came up and was presented to me to create a symphony…it was challenging. The whole thing was a big risk. I worked for many months just composing the music. It was a glorious project."

Was the orchestra cool with the idea of working with a rock artist?

"Yes, they were. The orchestra and the conductor were great to work with. It was obvious to them that I knew what I was doing, and I knew the music - I knew every note, in fact. So a respect was built very quickly. Plus, it wasn't like what you get a lot of times when orchestra players support a rock band; this was totally different. Instead of it being rock music with an orchestra backing, the music was all integrated, a real fusion. I'm very glad I did it."

Right after performing the symphony, you switched gears and took part in last year's fall run of the Experience Hendrix tour. Talk about a juxtaposition!

"For me, not at all, really. For me to go from one thing to the other is what it's all about. I've lived in all of these worlds my whole life. Think about it: I've gone from Frank Zappa to David Lee Roth to…you know, John Lydon to…"

By the way, that album you did with John Lydon is sill one of my favorite things you've ever done.

"Thank you. A lot of people seem to like that one. I like it, too. But the people you're with, the aura they have and the musical environment they create, I don't know, you just adapt to it all. When you get right down to it, I'm not a very versatile player, but I can adapt to a lot of situations. It's not like I can sit and play classical or jazz or blues - I never wanted to, really. I made conscious efforts to avoid sounding like a conventional blues, jazz or classical kind of player."

Still, you did grow up listening to and playing Hendrix, whose own playing was steeped in the blues.

"Yeah, but you know what I mean. There's just as much snootiness in the blues community as there is in the classical and jazz worlds."

"That's right - purists. I just don't belong in those worlds. Don't get me wrong: I appreciate good players who are genre-specific. I just never aspired to being genre-specific myself. I like rock music, though."

I understand you've recently started a new album. Is it too early to talk about what we can expect?

"I'm taking the first steps. Over the years, I've had a bunch of different concepts for bands - one of them was to feature two string players, and I did that with String Theories. For this record, I had an idea to work with two big percussionists, and then I thought about doing a band with an eight-piece horn section and a choir. But these things take a lot of time."

"Last year, I started to work on a CD with the String Theories band in mind. Then I committed to the orchestra composition. I didn't just write the one symphony, though; I wrote a bunch of other pieces, as well. The whole thing took over five months, so I had to abandon everything else I was doing. What that means now is, I don't have time to milk the string thing, and I don't have time to construct and compose for the percussion thing. So this new record is going to be pretty straight-ahead, without a lot of overdubs, very stripped-down. I kind of want to hand the guitar over on a silver platter."

Have you had any other players come in and work with you yet?

"No, I'm still sketching and demoing the songs. I have something like 50 snippets of things, so I'm still trying to figure out what's good, what works…the whole flow of what the record should be.

"One thing I am working on is a song I didn't write. I bought this CD of Blind Willie Johnson, and it's got all of his recordings. Man, his voice is so great! Originally, I heard him on this fantastic collection, The Anthology Of American Folk Music. There's so many songs of his that are incredible, but my favorite is John The Revelator. I'm doing a cover of that. I'm cutting his vocal up - I'm going to have him double himself. But there will be some parts that I sing, so I'm rewriting some of the lyrics.

"I don't know for sure if it's going to make the record, but I'm excited to try it. Lots of people have done the song already, but I think I can take it somewhere else. I put down this scratch drum track, and I'm kind of stretching his vocal. Fantastic song, man. I've listened to the original so many times. Oh! And then I found this amazing version online by this high school choir called The Counterpoints. It is totally off the hook! I've already written to the curator about using it. Their version is really fast, but it's unreal."

Wow, that's quite a concept. So the whole record isn't going to be stripped-down.

"Well, not this track if I can pull it off."

In addition to a new record, you're coming out with an update of your Ibanez signature acoustic-electric, the Euphoria.

"That's right. I've had a relationship with Ibanez for close to 30 years, and we've created some incredible instruments that have been very inspirational in the field. Some years ago, they asked me if I wanted to make an acoustic guitar. I like acoustics, I play them, so I came out with the Euphoria.

"Over time, your ideas evolve, your needs change. I like big, fat-sounding acoustic guitars, but usually they're hard to play - there's no cutaway, so you can't get your hand all way up the neck. I also like playing thin, hollow-bodied acoustic-electrics. Ibanez brought me some sketches… The idea was to get a great big sound but with a guitar that was slimmer. I'm really happy with the new Euphoria. It's got a nice cutaway, you can reach all the frets, it's got a beautiful vine inlay. Of course, it has the spruce top - there's no way getting around that. It's aesthetically pleasing, and it sounds great."

"The electronics were very important. I like the electronics that I was using, but they were too big to fit the new model, so we had Furman tweak one of their top-end standard set of electronics for this guitar. I'm not a big fan of amp modeling - it's just a personal taste. This has a tone modeling switch, but it's more of a tone control. Tone modeling, you know, gives you 'sound, sound, sound' with nothing in-between. So this control gives you the full range of tones. There's a volume control - real simple. It turned out nice."

Last year, the film you co-produced, Crazy, was released. Do you have any other such projects happening?

"There are a couple of things I'm working on that I'm very excited about. One of them is a whole new division for Favored Nations. I'm partnering with a company in New York, and what we're going to do is develop a completely new model for a record company. It's still way early to talk about, but it's going to be very contemporary. Ever since I started my first label at the age of 20, I've always been aware of how the music business works. Trends can happen, and things can change, but there's always opportunity.

"The other thing is something that's going to be a lot of fun. It's called Guitar TV - an internet station, 24/7, streaming all of the greatest guitar performances ever. Basically, it all started when I asked myself, 'What would I like to see?' That's how a lot of good ideas come about. So we're going to be launching that at some point. Guitar TV is going to be all guitar, every genre, the greatest performances. Be it Joe Pass, Eric Johnson, Hendrix, Satriani - all the greats, here they are.

"Not only that, but it's going to have some really cool features. At any point, you can click on it and go to a Wikipedia page and read about the artist. You can click on another place and go to their website. You can click and buy their CDs. And what's really cool is, you can click on the guitar the artist is playing and learn everything about the instrument. You can even find where you can buy the guitar, too. It's crazy! The whole thing is built, and the man who's going to be running it, Andy Alt, is talking to companies about content. I can't wait to get it off and running. I figure, if I want something like this, there's got to be other people who want the same thing."