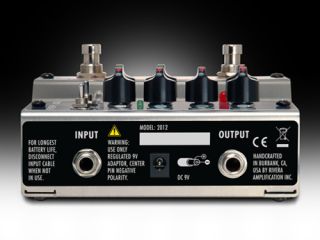 NAMM 2011: Making their surprise debut last Friday alongside the all-new Rockcrusher attenuator, Rivera have announced a new range of stompboxes - the first to be released under the Rivera name for thirty years.

The Shaman range kicks off with three very different overdrive pedals: the Blues Shaman is aimed at blues players; the Metal Shaman is for metallists - naturally; and for everything else the Double Shaman promises to be a highly versatile performer, with two channels called LA and Austin.

"Way back in 1976 I was modifying a variety of pedals from other manufacturers, as well as building custom pedals and effects racks," comments Paul Rivera Sr. "If you listen to Supertramp or Toto, those are my special chorus units. Between 1979 to 1983 or so, I also built a line of pedals called the Buff series. I'm really excited about the new Shaman range. One thing they're not is another bunch of 808 clones."

Given that Paul's sonic wizardry has been behind the signature tones of some of the world's greatest players over the years, including Larry Carlton, Robben Ford, Steve Lukather, Jay Graydon, Doyle Dykes and Slipknot's Mick Thomson, to name just a few, we're pretty excited too.

Powered by 9V battery or a regulated DC adaptor, these pedals are so new that UK pricing has yet to be finalised; however, in the US the Double and Metal Shamans are expected to be just under $300, with the Blues Shaman at around $250.