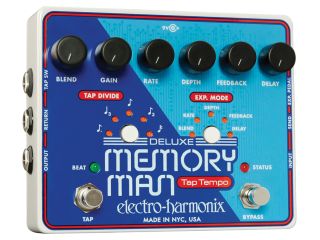 NAMM 2011 PRESS RELEASE: Electro-Harmonix (booth 5396) proudly announces the introduction of the most powerful version of the Deluxe Memory Man analog delay ever.

Based on the legendary design which has been an industry standard for over three decades, this new pedal provides sweet organic delay and modulation, along with a host of desirable performance functions.

The DMM's Tap Tempo feature is highly desired by musicians because it enables them to quickly and accurately set a delay time that is in sync with a song by simply pressing the Tap button in time to the music. This new delay takes that a step further by providing five Tap Divide subdivisions.

The Expression Pedal Input permits real time control over Blend, Rate, Depth, Feedback and Delay while the Effects Loop lets you insert effects into your wet signal without changing your dry signal.

Equipped with true bypass and a standard 9.6-Volt/DC200mA AC adapter, the new Deluxe Memory Man w/Tap Tempo will begin shipping in late March 2011 with a U.S. retail list price of $504.