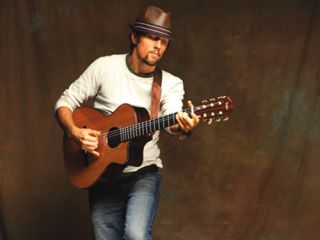 Mraz's live shows have garnered critical acclaim around the world and his albums have earned multiple Grammy nominations. Late last year, his hit single, "I'm Yours", set a music industry record for the most weeks on the Billboard Hot 100 charts.

In early December, Mraz visited the Taylor factory to meet with the company's design team and to complete work on his own Taylor model, the Jason Mraz Signature Model (JMSM).

The JMSM is based on Mraz's go-to guitar, a Taylor nylon-string NS72ce, a guitar he says "nurtured a whole album's worth of songs" and in performances, "gave me a way to communicate with the audience without a guitar standing in my way. It felt like it was part of me, it was a part of the energy that I wanted to put out there."

Crafted from a back and sides of Indian rosewood and a top of Western Red cedar, the JMSM includes key design touches provided by Mraz. The fretboard inlay, in Mexican cypress, features the phrase "Be Love" set below a design that features a triangle within a circle, which mirrors a forearm tattoo he got in July 2009. "I chose this symbol simply because I want to be whole in mind, body and soul," he explains.

Mraz's touch can also be seen in the soundhole rosette, which features one of the artist's passions: the zodiac. "I'm always looking into the cosmos to inspire me or to help me create my schedule, even for tours and for when I'm going to write and what I'm going to do," Mraz shares.

"So, everyone can relate to this because your zodiac sign is going to be in the rosette somewhere, in the person you love, all the relationships in your life can be related to this…the rosette is here for us to put ourselves into the universe." The hand-inlaid rosette of the twelve signs of the zodiac is crafted from a Hawaiian koa ring, a background of bubinga, and Mexican cypress symbols.

The JMSM comes ready for both intimate venues and crowd-packed stadiums with the company's ES-N pickup, in a hardshell case, with a certificate of authenticity signed by Jason Mraz. The JMSM model will be available at authorized domestic and international Taylor dealers in late spring.