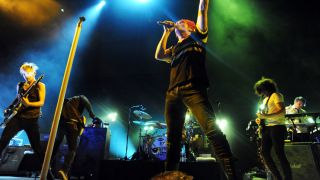 In a surprise announcement, My Chemical Romance have called it quits. The New Jersey-based alt-rock band, which became a platinum seller during the past decade, posted news of their split on their website late last night (22 March):

"Being in this band for the past 12 years has been a true blessing. We've gotten to go places we never knew we would. We've been able to see and experience things we never imagined possible. We've shared the stage with people we admire, people we look up to, and best of all, our friends. And now, like all great things, it has come time for it to end. Thanks for all of your support, and for being part of the adventure."

Founded in 2001, My Chemical Romance released its debut album, 2002's I Brought You My Bullets, You Brought Me Yours Love on Eyeball Records. Soon after, they signed with Reprise Records and scored an international hit with 2004's Three Cheers For Sweet Revenge. The band's next two releases, The Black Parade (2006) and Danger Days: The True Lives Of The Fabulous Killjoys (2010), were both critical and commercial successes.

The band have kept mum about plans for a new album, but until mid-2012 they continued to perform live.