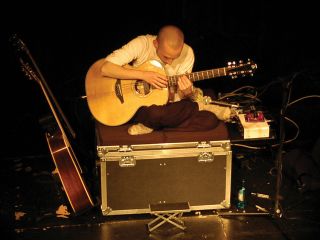 PRESS RELEASE: With two months to go until Music Live 2009 at the NEC, the event's artist roster has been further enhanced with several significant recent additions.

Canadian acoustic guitar phenomenon Erik Mongrain is to appear at the show on Saturday 7 November. His unique 'lap-tapping' playing approach has brought Erik international acclaim as one of the most important players of his generation - and garnered his 'Air Tap' video more than 4 million views on YouTube.

Fans of stunning acoustic guitar will also be spellbound by Cort endorsee Matt Marriott in the Clinic Room (Sunday 8). Having already supported Eric Mongrain and Gordon Giltrap of late, Matt is fast making a name for himself as one of the UK's finest acoustic talents.

Drummers are also to be well entertained at Music Live, with the presence of the Burningbeat Boys on the Live Stage. A loose collective of some of the finest drum talent in the UK, Burningbeat Boys is the brainchild of drummers Robin Guy and Sam Hill; their Music Live set will feature appearances from Nick Barker (Cradle Of Filth, Dimmu Borgir), Matt Goom (Glenn Hughes), Jonno Lodge (Biomechanical) and Neil Hutton (Benediction). The ethos of the Boys is to bring back the classic drum battle of days gone by, but for non-drummer visitors the line-up will also be performing a selection of cover tunes to intersperse the percussive pummelling.

Grand Theft Audio - featuring Three Colours Red's Chris McCormack and The Wildhearts' Ritch Battersby - are to reform specifically for a Live Stage slot at Music Live 2009. And drummer Battersby (currently riding high having collected a Kerrang! Award with The Wildhearts this year) will also appear in the Clinic Room for masterclasses during the weekend.

With the Hellfire Festival (taking place on the Music Live stage each evening of the event) having confirmed a varied line-up covering everything from Saxon, Fields Of The Nephilim and Anvil to Sylosis and Blakfish, the tenth Music Live weekend is set to be the most exciting and inspirational so far.

Music Live show manager Jason Hunt said, "The line-up for Music Live this year is going to be great fun for visitors. We're really pleased to have clinched Erik Mongrain for the show, given that he rarely visits the UK, and the Live Stage will be a blast, with unsigned talent and established British artists providing a typically eclectic Music Live mix of entertainment throughout the weekend."