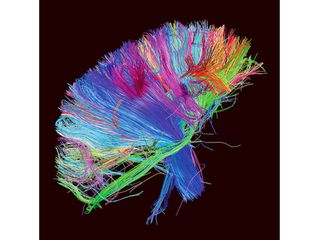 Looking like a cross between a groovy fiber optics system and a switched-on jellyfish is the just-revealed artwork for Muse's upcoming album, The 2nd Law.

Actually, it's neither of those things, but in keeping with most things Muse, there's more than a bit of science involved. The artwork is taken from The Human Connectome Project, imaging which navigates the brain's pathways and explores the circuits in our minds, detailing how we process neural information to help scientists better understand brain diseases, including Alzheimer's, autism and multiple sclerosis.

Heady? Absolutely. But we're betting the music that goes along with it, said to be vaguely dubstep influenced, rocks the body as well as the mind.

The 2nd Law will be released on 18 September. In the meantime, in case you somehow missed it, check out Muse's new song Survival, the official song of the London 2012 Olympic Games.