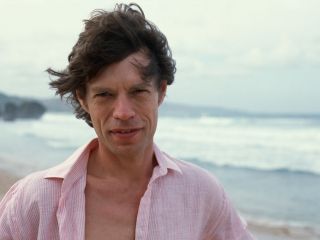 Postcards from Mick's musical holiday away from the Stones (Image credit: Wally McNamee/CORBIS)

Those of a sensitive disposition might be advised to look away now. According to reports, Rolling Stone Mick Jagger has spent the last 18 months working on a brand new project: Super Heavy, featuring the assorted talents of Dave Stewart, Joss Stone, Damian Marley and film composer AR Rahman, with an album set to drop in September.

Dave Stewart told Rolling Stone magazine how a call he made to Jagger from his home in Jamaica sparked things off: "I live in Lime Hall right above St Ann's Bay. It's kind of the jungle, and sometimes I'd hear three sound systems all playing different things. I always love that, along with Indian orchestras. I said to Mick, 'How could we make a fusion?'"

When rich white rock musicians try their hands at 'world music', it's often a reason to be fearful, but although Jagger describes the forthcoming album as "a bit odd," he also told Rolling Stone that "it's not all weird and strange" and that fans "will find most of it accessible."

"It's different from anything else I've ever been involved in," said Jagger. "The music is very wide-ranging - from reggae to ballads to Indian songs in Urdu."

Where does this leave the greatest rock 'n' roll band of all time? With no plans to tour with Super Heavy, presumably Jagger still has plenty of space left in his diary next summer, with 12 July marking the 50th anniversary of The Rolling Stones' first ever gig at London's Marquee Club in 1962.

Last week Keith Richards expressed an interest in marking the occasion by hitting the road again:

"Something's blowing in the wind. The idea's there. We kind of know we should do it but nobody's put their finger on the moment yet. This is what we have to ask each other: do we want to go out in a blaze of glory? We can, if Mick and Charlie feel like I do - that we can still turn people on. We don't have to prove nothing any more. I just love playing, and I miss the crowd."

In his autobiography, Keith describes Jagger's Goddess In The Doorway solo album as being "like Mein Kampf - everyone had it, but no-one read it", so we don't expect Super Heavy to feature on The Human Riff's iPod any time soon.

Collaborating with reggae artists? Keef did that years ago, pal...