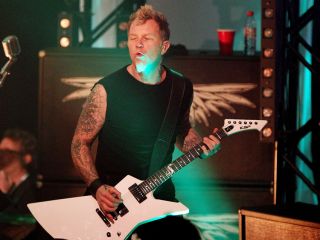 Playing classic albums in their entirety has become the rage these days, and this June Metallica will uphold this new tradition by performing their 1991 self-titled album, commonly referred to as the 'Black Album' from start to finish during their very own music festival.

In New Jersey, no less. You got it, Metallica have just announced the Orion Music + More festival, which includes 22 bands and comedians over two days. The festival will take place on 23 and 24 June in Atlantic City, New Jersey. Metallica will headline both nights, with "special set lists" both nights, one night being the Black Album and the other being...are you ready for this...the whole of Ride The Lightning.

"Metallica has invited 22+ of their favorite artists from across the music and comedy spectrum to the inaugural Orion Music + More," says an official statement. "More than just music, the festival will also feature a lifestyle element showcasing the band's individual interests - and allowing fans to interact directly with each of the band members. More details soon!"

"We've had the idea of doing our own lifestyle festival with lots of diverse music and fun and games for years," said drummer Lars Ulrich. "Finally this year, all the practical ducks lined up in a row, and we are beyond psyched to bring Orion to our fans, friends and the curious."

The band is hoping to make the festival an annual event. More info is available here.