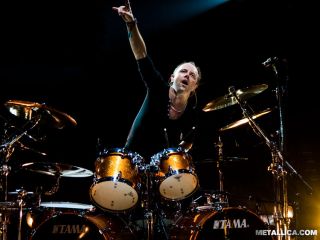 Ulrich - pointing to an independent future

It looks like Metallica could be the next mega-group to ditch working with a major label.

In a recent interview with the Los Angeles Times at SXSW, drummer Lars Ulrich was extremely forthright.

When asked if Metallica needed a major label, Ulrich, despite being surrounded by Warner Music Group reps, said. "Without offending any of the good people from the record company in the room, no.

"Let's cut to the chase. The primary - not the only, but the primary - function of a record label is to act as a bank. When you're fortunate enough to be successful and so on, you don't need to rely on record companies as the banks."

Tellingly, 2008's Death Magnetic was the last album Metallica contractually owed to the Warner Music Group. Ulrich revealed Metallica are already planning to seek advice from artists who've made the leap to independence.

"We're doing a bunch of shows with Trent [Reznor, Nine Inch Nails] this summer in Europe," Ulrich disclosed. "I look forward to sitting down and talking to him about what's on his radar."

But chances are Metallica won't follow Madonna, U2 and Nickelback and link up with the Live Nation touring organisation.

"We haven't sold out to Live Nation, and we are certainly not planning on it, he told the LA Times. "And we are very, very fortunate that we do not need what they offer."

While Metallica are of course entitled to consider their options, going down the route of Reznor and fellow web-distribution champions Radiohead would represent a significant shift in attitudes. In the early 2000s, Ulrich became something of a hate-figure for fans of music on the web. He was among those who tried to sue the Napster file-sharing site out of existence.

Times, of course, change and with a dedicated web audience already via Metallica.com, the metal legends are in a perfect position to distribute direct to their audience.

It's currently $45 per year to join The Metallica Club fanclub, but you don't get any music for that - just magazines, a t-shirt and other collectibles.

What do you think: would Metallica bundle new music with the fanclub offering, tie it in with video games, or still sell their albums separately?