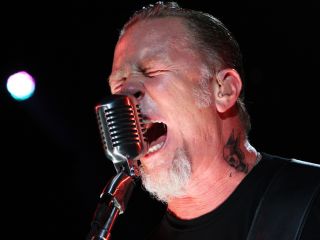 Metallica and Lou Reed announced their surprise collaboration only two months ago, but the album they recorded has already been given a release date. According to the official website of the project, the album will drop on 31 October and in the US on 1 November.

When news of the pairing was made public last June, Metallica wrote in a statement, "Ever since we had the pleasure of performing with Lou at the 25th anniversary of the Rock And Roll Hall Of Fame at Madison Square Garden in October of 2009, we have been kicking around the idea of making a record together."

Speaking to Rolling Stone about working with Reed, Metallica drummer Lars Ulrich said, "I don't think we've ever felt this free. There's nothing that's totally outside of the boundary for us, nothing that feels like, 'Oh, what happens if we go there?'"

Reed, for his part, feels equally bubbly about his partnership with the metal giants. Talking to New York magazine, the onetime Velvet Underground leader said, "It's maybe the best thing done by anyone, ever. It could create another planetary system. I'm not joking, and I'm not being egotistical."

Currently, both Reed and Metallica are without record deals. No word has been given how the yet-to-be-titled album will be released.

To get a taste of what the non-egotistical underground rock pioneer and the masters of metal might sound like, take a stroll down memory lane and check out Sweet Jane from 2009 in the video above.