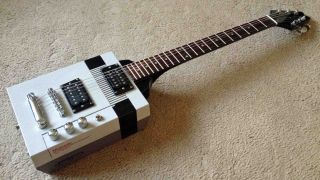 Employing one of our favourite guitar/videogame puns in recent memory, the NES Paul is here to make your wildest Nintendo/six-string/moustachioed plumber fantasies come true.

Featuring a body composed entirely of an original Nintendo Entertainment System, the NES Paul can be built in a number of configurations, from a Les Paul-style humbucker and tune-(Mari)o-matic arrangement to a triple-single coil and hardtail setup - whatever you choose, it's sure to be a Peach… although the tone can be a little boxy.

Best of all, the guitar's headstock can be finished off with your favourite Nintendo character (Link, surely).

If you fancy a NES Paul of your own, they're available from Doni Guitars, starting at £450 - better get thumping those ? blocks.