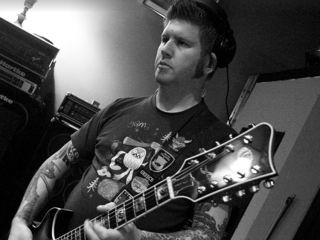 Kelliher has his likes...and a few dislikes

New to the summer festival scene this year is Sonisphere, a six-country, seven-date hard rock extravaganaza that boasts one of the strongest lineups we've seen.

Sonisphere hits the UK's Knebworth Park the weekend of 1-2 August, with acts including Metallica, Slipknot, Thin Lizzy, Lamb Of God, Alice In Chains, Bullet For My Valentine and others. (Check the official Sonisphere website for details.)

MusicRadar asked Mastodon's Bill Kelliher about playing massive outdoor fests, and got his thoughts on Sonisphere.

"Playing huge festivals is almost an art form," says Kelliher. "What works in a big club or an arena doesn't fly at an Ozzfest or something like that. I imagine Sonisphere is going to be the same way.

"You have to gauge the bands you're up against, see who you're in-between and you have to check the audience. I mean, if you're playing before Slayer, you better know that their crowd wants blood, and you have to hit 'em hard. But if it's The Flaming Lips, you have room to experiment, 'cause the audience is all tripped-out."

As for Knebworth, Kelliher is stoked. "It's going to be an honor," he says. "Growing up, I always heard about these legendary bands playing this place called Knebworth, so the fact that Mastodon is going to play the same place as Led Zeppelin once did, it's gonna be awesome!"

We ran down some of the bands on the Knebworth roster for Kelliher, and here are his comments:

"Mastodon pretty much wouldn't exist without Metallica. To say they've influenced us...c'mon. They're gods. I respect them in every way possible. They've put out five life-changing albums: Kill 'Em All, Ride The Lightning, Master Of Puppets, …And Justice For All and the 'Black Album' - each one is a desert-island disc.

"We got to play some shows with them a while ago and they were brilliant. Super-cool dudes. Totally down to earth. But what fantastic musicians! They actually sound like their records - that's how great they are. I don't know how they do it. Practice, I guess."

"We've toured with them before. I don't know...I don't like how they became this sort of a Motley Crue wannabe band. I shouldn't talk shit about other groups, but I'm a real music snob. I like what I like."

"I'm a huge fan. I love Layne Staley's voice - what an amazing singer he was. It's such a shame he's not around anymore. But Jerry Cantrell is an phenomenal guitar player, a great singer in his own right and just an all-around monster-talented dude. I'm looking forward to seeing them with their new singer [William DuVall]."

"Good friends of ours. We've done a bunch of shows with them. Great dudes. They're like the new Pantera or something. A very, very strong band. Killer songs, the whole deal. The kids are going to go crazy for them."

"I'm not a fan. What can I say? They're just not my cup of tea. I don't want to be a dick and say 'they suck,' because obviously they have a ton of fans who think they don't suck. They just...next!" (laughs)

"An awesome band. Great friends of ours. They play from the heart and they really bring it every time. Rob Flynn is one of those singers who knows how to connect with any crowd he plays to. Machine Head, yeah, I'm definitely into seeing them."

"My aunt used to play a lot of Thin Lizzy, so that's how I came to know their music. Great band. Obviously, they're not the same Thin Lizzy from back in the day, but I respect the fact they they're still doin' it, you know? Plus, [guitarist] Scott Gorham is a very cool dude. I met him in the UK a while back and got to jam with him, and man, can that guy play! He said he'd join us on stage at one of these shows, so I'm going to hold him to his word."