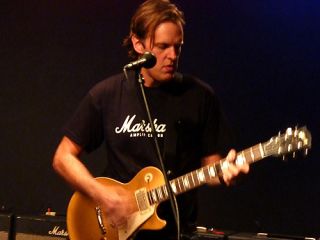 Continuing the current trend for low output valve amps, Marshall has announced the release of its new Class5 combo.

The amp was unveiled 28 July at Ronnie Scott's Jazz Club in Soho, London, with Joe Bonamassa playing a sterling set through the combo in front of an audience of rock glitterati, Marshall dealers and press.

Built in the UK, the Class5 is a class A, five-watt model loaded with a pair of ECC83s in the preamp, an EL84 power amp valve and a 10-inch Celestion G10F-15 driver.

The simple controls are for volume, treble, middle and bass, and you get a headphone jack socket and a 16ohm extension cab output. The Marshall Class5 is expected to retail under £300.

MusicRadar will be testing one very soon.

Next page: Pictures of the Class5 and the launch event