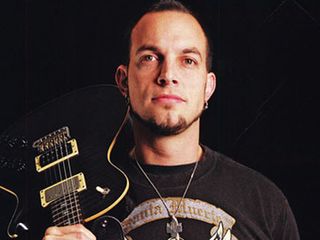 In recent weeks, guitarist Mark Tremonti has found his band Alter Bridge in more headlines than he's seen in years. Only problem is, it's because the group's singer, Myles Kennedy, is strongly rumored to be Robert Plant's replacement for a Led Zeppelin tour next year.

Since Robert Plant made it clear he has no intention of hitting the road with Zeppelin, Jimmy Page, John Paul Jones and Jason Bonham have apparently dug in their heels and decided to tour without him.

"We've had the odd singer come in and have a bash," Jones said during a recent interview. At the same time, speculation was rampant as to which 'odd singer' Jones was referring to. Aerosmith's Steven Tyler? Chris Cornell? David Coverdale?

And then all eyes focused on the least known of the bunch, Alter Bridge's Myles Kennedy. Twisted Sister's Dee Snider, who shares management with Robert Plant, blew the lid off the story and said that Page, Jones and Bonham were set to tour with Kennedy should Plant refuse to reconsider.

While Kennedy has remained silent on the issue, fans have made their feelings known in no uncertain terms. In a MusicRadar poll, 42% of readers who voted said Led Zeppelin "shouldn't bother touring." And of the singers floated as possible fill-ins for Plant (Axl Rose, Dave Grohl, Steven Tyler, David Coverdale), Kennedy scored a palty 3%. Ouch!

Nevertheless, the rumor that Kennedy is the man for the job persists, and so MusicRadar checked in with Mark Tremonti to get the scoop. The guitarist was kicking back in a hotel room in Birmingham, England before an Alter Bridge show.

What is the status of Alter Bridge? Obviously, there's a lot of talk right now -

"We're going to be touring through the holidays. Next year we'll spend a lot of time writing and hopefully be able to get into the studio in the fall. We don't have any songs written yet, but there's a lot of ideas floating around."

Right. But the one thing that could change those plans is if Myles is picked to replace Robert Plant in Led Zeppelin. He's the one guy whose name keeps popping up.

"Well, we all have to be real hush-hush about it. We hear the rumors; we know what everybody's saying; but as far as what's really happening...I don't really know. Nobody does. [laughs] The only thing I can say is that, no matter what happens next year, it'll be for the ultimate benefit of Alter Bridge. Alter Bridge is our number one priority. Nothing has changed that in anybody's mind."

So even if Myles does tour with Zeppelin, he's going to stay in Alter Bridge?

The Zeppelin tour would be just a one-off for him? Would he make an album with them? Apparently, they're writing material...

"Oh, who knows? We don't know any details. But I have to say...there wouldn't be a better guy in the world to play that role than Myles. I think it'd be very exciting."

That's very diplomatic of you. Not everybody has Led Zeppelin trying to poach their singer.

[laughs] "I guess. No, look, we all support Myles 100 percent. He's one of the most talented, hardest-working musicians I've ever met. So if the Zeppelin thing happens, hey, he deserves it."

And you'd get to stand on the side of the stage every night and watch Jimmy Page.

You and I spoke a few years ago about the possibility of a Creed reunion with Scott Stapp and you said that it would take "millions and millions of dollars for that to happen" - and even then you'd probably still say no.

Given the set of circumstances that could go down next year, is the chance of a Creed reunion still nil?

"Who knows what can happen next year? 2009 could be one of the craziest years ever for us. Again, all I can say is that Alter Bridge is still very much a band and we have every intention of carrying on."