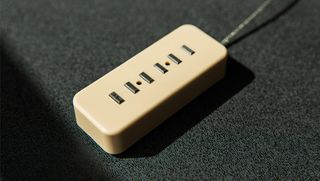 'Staple' P-90 pickups were originally found on late-'50s Les Paul Customs, and had a different tonality to their round pole-pieced cousin - it's this rare sound that Lollar has sought to capture with its new Staple pickup.

Employing rectangular Alnico 5, non-adjustable pole pieces, the Staple possesses a tone midway between Fender single-coils and Gibson P-90s, with a punchier attack and more overtone clarity than a typical P-90.

The Staple uses 42-gauge coil wire, weighs in at 8.2K Ohms DC resistance and is available with black, cream or white soapbar covers.

Lollar recommends this one for the neck position, and it's available now for $145.