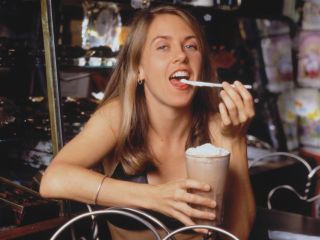 Liz Phair looks like she's having fun, and for $5.99, you can too (Image credit: Gary Hannabarger/Corbis)

Liz Phair's new album, Funstyle, which she quietly dropped online the other day (3 July, to be exact) is a strange one, to say the least. But coming from the artist whose first album, Exile In Guyville, was a woman's response to The Rolling Stones' Exile On Main Street, why should we expect something ordinary?

Available on her website for the whopping price of $5.99 (come on, cab rides cost more!), the record, released with no press or promotion, features the debut single Bollywood, in which Phair raps - yes, she raps! - about the state of her career.

Over tablas, banjos and various samples, Phair says, "I was tripping looking at my portfolio / Wondering how I'm gonna make enough dough, ya know" - and then talks about phoning up various TV writers for One Tree Hill and Jericho to inquire about scoring their shows.

Of course, this tactic must have worked, for Phair did score the theme song to the half-a-season-long '70s send-up Swingtown. (Warning: listen to this at your own peril.)

Despite the low-rent tackiness of Funstyle's cover art, which looks to be a screen grab over some sort of strange desktop wallpaper of barnyard animals, we still have a soft spot for the artist who penned the classic Fuck And Run.