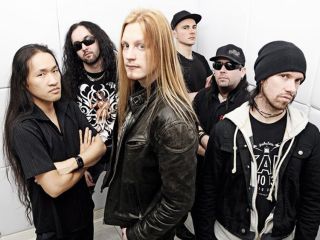 DragonForce ask the musical question: How fast is now?

Sure, it's fast. But is it one of the fastest songs ever? Or, to put it in the proper context, is Fallen World the 'fastest song' that power metal kings DragonForce, known for setting land speed shred records, have ever laid down? That's what they're saying, so check it out above and be the judge.

Fallen World is the first track from the upcoming album The Power Within, due out 16 April. It's the band's fifth album overall, and their first with new vocalist Marc Hudson. He replaces ZP Theart, who parted ways with the group in March 2010.

"The last two years have been the most fun we ever had making an album," said guitarist Herman Li. "Through writing, jamming and touring together, we have built this incredible energy and it has been fully captured on the new album.

"This time around, we've really brought our metal side to the surface and made some of the best music of our career. From the fastest song we've ever recorded to the slower songs, and some things you would never expect from us, this is by far the most diverse DragonForce album yet."