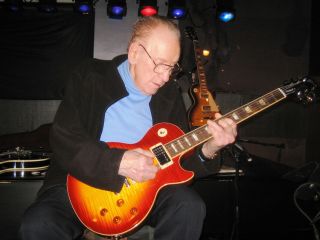 Les Paul has been synonymous with Gibson for more than half a century thanks to the iconic guitar that bears his name, and the upgraded 2008 version could be one of the best ever.

Purists will be pleased to see the return of a fifties-style enlarged neck tenon, but other upgrades are less backward-looking. The neck itself has a brand new asymmetrical profile - thinner on the treble side - with the final hand-sanding process ensuring that no two models will be exactly the same.

Across the board, the hardware is impressively robust and road-worthy; a Neutrik locking jack socket, TonePros locking bridge and tailpiece, Dunlop straplocks and 18:1 gear ratio locking Grover tuners all come as standard.

That's a lot of locking, and a lot less to worry about out on the road as a result.

Newly-designed controls include custom pots made by electronic gurus Bourns, while the Plek system ensures an optimum set-up. Available finishes include a range of bursts alonside Ebony and Goldtop options.

The new Les Paul certainly has the approval of the man whose name adorns its headstock and we can't wait to get our hands on one.

Stateside RRP is $3899, with stock due to hit stores in August. For detailed specifications, visit the official Gibson website.