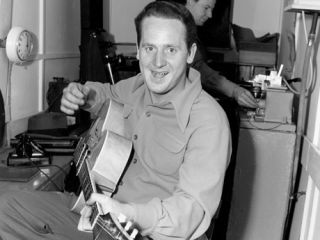 Electric guitar pioneer Les Paul has died at the age of 94. Gibson Guitars has issued the following statement:

Les Paul, acclaimed guitar player, entertainer and inventor, passed away today from complications of severe pneumonia at White Plains Hospital in White Plain, New York, surrounded by family and loved ones. He had been receiving the best available treatment through this final battle and in keeping with his persona, he showed incredible strength, tenacity and courage. The family would like to express their heartfelt thanks for the thoughts and prayers from his dear friends and fans. Les Paul was 94.

One of the foremost influences on 20th century sound and responsible for the world's most famous guitar, the Les Paul model, Les Paul's prestigious career in music and invention spans from the 1930s to the present. Though he's indisputably one of America's most popular, influential, and accomplished electric guitarists, Les Paul is best known as an early innovator in the development of the solid body guitar.

His groundbreaking design would become the template for Gibson's best-selling electric, the Les Paul model, introduced in 1952. Today, countless musical legends still consider Paul's iconic guitar unmatched in sound and prowess. Among Paul's most enduring contributions are those in the technological realm, including ingenious developments in multi-track recording, guitar effects, and the mechanics of sound in general.

Born Lester William Polsfuss in Waukesha, Wisconsin on June 9, 1915, Les Paul was already performing publicly as a honky-tonk guitarist by the age of 13. So clear was his calling that Paul dropped out of high school at 17 to play in Sunny Joe Wolverton's Radio Band in St. Louis. As Paul's mentor, Wolverton was the one to christen him with the stage name "Rhubarb Red," a moniker that would follow him to Chicago in 1934.

There, Paul became a bonafide radio star, known as both hillbilly picker Rhubarb Red and Django Reinhardt-informed jazz guitarist Les Paul. His first recordings were done in 1936 on an acoustic—alone as Rhubarb Red, as well as backing blues singer Georgia White. The next year he formed his first trio, but by 1938 he'd moved to New York to begin his tenure on national radio with one of the more popular dance orchestras in the country, Fred Waring's Pennsylvanians.

Tinkering with electronics and guitar amplification since his youth, Les Paul began constructing his own electric guitar in the late '30s. Unhappy with the first generation of commercially available hollowbodies because of their thin tone, lack of sustain, and feedback problems, Paul opted to build an entirely new structure.

"I was interested in proving that a vibration-free top was the way to go," he has said. "I even built a guitar out of a railroad rail to prove it. What I wanted was to amplify pure string vibration, without the resonance of the wood getting involved in the sound." With the good graces of Epiphone president Epi Stathopoulo, Paul used the Epiphone plant and machinery in 1941 to bring his vision to fruition. He affectionately dubbed the guitar "The Log."

Les Paul's tireless experiments sometimes proved to be dangerous, and he nearly electrocuted himself in 1940 during a session in the cellar of his Queens apartment. During the next two years of rehabilitation, Les earned his living producing radio music.

Forced to put the Pennsylvanians and the rest of his career on hold, Les Paul moved to Hollywood. During World War II, he was drafted into the Army but permitted to stay in California, where he became a regular player for Armed Forces Radio Service.

By 1943 he had assembled a trio that regularly performed live, on the radio, and on V-Discs. In 1944 he entered the jazz spotlight—thanks to his dazzling work filling in for Oscar Moore alongside Nat King Cole, Illinois Jacquet, and other superstars —at the first of the prestigious Jazz at the Philharmonic concerts.

By his mid-thirties, Paul had successfully combined Reinhardt-inspired jazz playing and the western swing and twang of his Rhubarb Red persona into one distinctive, electrifying style. In the Les Paul Trio he translated the dizzying runs and unusual harmonies found on Jazz at the Philharmonic into a slower, subtler, more commercial approach. His novelty instrumentals were tighter, brasher, and punctuated with effects. Overall, the trademark Les Paul sound was razor-sharp, clean-shaven, and divinely smooth.

As small combos eclipsed big bands toward the end of World War II, Les Paul Trio's popularity grew. They cut records for Decca both alone and behind the likes of Helen Forrest, the Andrews Sisters, the Delta Rhythm Boys, Dick Hayes, and, most notably, Bing Crosby. Since 1945, when the crooner brought them into the studio to back him on a few numbers, the Trio had become regular guests on Crosby's hit radio show. The highlight of the session was Paul's first No. 1 hit and million-seller, the gorgeous "It's Been A Long, Long Time."

Meanwhile, Paul began to experiment with dubbing live tracks over recorded tracks, also altering the playback speed. This resulted in "Lover (When You're Near Me)," his revolutionary 1947 predecessor to multi-track recording. The hit instrumental featured Les Paul on eight different electric guitar parts, all playing together.In 1948, Paul nearly lost his life to a devastating car crash that shattered his right arm and elbow. Still, he convinced doctors to set his broken arm in the guitar-picking and cradling position.

Laid up but undaunted, Paul acquired a first generation Ampex tape recorder from Crosby in 1949, and began his most important multi-tracking adventure, adding a fourth head to the recorder to create sound-on-sound recordings. While tinkering with the machine and its many possibilities, he also came up with tape delay. These tricks, along with another recent Les Paul innovation—close mic-ing vocals—were integrated for the first time on a single recording: the 1950 No. 1 tour de force "How High the Moon."

This historic track was performed during a duo with future wife Mary Ford. The couple's prolific string of hits for Capitol Records not only included some of the most popular recordings of the early 1950s, but also wrote the book on contemporary studio production. The dense but crystal clear harmonic layering of guitars and vocals, along with Ford's close mic-ed voice and Paul's guitar effects, produced distinctively contemporary recordings with unprecedented sonic qualities. Through hits, tours, and popular radio shows, Paul and Ford kept one foot in the technological vanguard and the other in the cultural mainstream.

All the while, Les Paul continued to pine for the perfect guitar. Though The Log came close, it wasn't quite what he was after. In the early 1950s, Gibson Guitar would cultivate a partnership with Paul that would lead to the creation of the guitar he'd seen only in his dreams. In 1948, Gibson elected to design its first solidbody, and Paul, a self-described "dyed-in-the-wool Gibson man," seemed the right man for the job. Gibson avidly courted the guitar legend, even driving deep into the Pennsylvania mountains to deliver the first model to newlyweds Les Paul and Mary Ford.

"Les played it, and his eyes lighted up," then-Gibson President Ted McCarty has recalled. The year was 1950, and Paul had just signed on as the namesake of Gibson's first electric solidbody, with exclusive design privileges. Working closely with Paul, Gibson forged a relationship that would change popular culture forever.

The Gibson Les Paul model - the most powerful and respected electric guitar in history—began with the 1952 release of the Les Paul Goldtop. After introducing the original Les Paul Goldtop in 1952, Gibson issued the Black Beauty, the mahogany-topped Les Paul Custom, in 1954. The Les Paul Junior (1954) and Special (1955) were also introduced before the canonical Les Paul Standard hit the market in 1958. With revolutionary humbucker pickups, this sunburst classic has remained unchanged for the half-century since it hit the market.

"The world has lost a truly innovative and exceptional human being today. I cannot imagine life without Les Paul. He would walk into a room and put a smile on anyone's face. His musical charm was extraordinary and his techniques unmatched anywhere in the world," said Henry Juszkiewicz, Chairman and CEO of Gibson Guitar. "We will dedicate ourselves to preserving Les' legacy to insure that it lives on forever. He touched so many lives throughout his remarkable life and his influence extends around the globe and across every boundary. I have lost a dear, personal friend and mentor, a man who has changed so many of our lives for the better."

"I don't think any words can describe the man we know as Les Paul adequately. The English language does not contain words that can pay enough homage to someone like Les. As the "Father of the Electric Guitar", he was not only one of the world's greatest innovators but a legend who created, inspired and contributed to the success of musicians around the world," said Dave Berryman, President of Gibson Guitar. "I have had the privilege to know and work with Les for many, many years and his passing has left a deep personal void. He was simply put - remarkable in every way. As a person, a musician, a friend, an inventor. He will be sorely missed by us all,"

With the rise of the rock 'n' roll revolution of 1955, Les Paul and Mary Ford's popularity began to wane with younger listeners, though Paul would prove to be a massive influence on younger generation of guitarists. Still, Paul and Ford maintained their iconic presence with their wildly popular television show, which ran from 1953-1960. In 1964, the couple, parents to a son and daughter, divorced. Paul began playing in Japan, and recorded an LP for London Records before poor health forced him to take time off - as much as someone so inspired can take time off.

In the 1977, Paul resurfaced with a Grammy-winning Chet Atkins collaboration, Chester and Lester. Then the ailing guitarist, who'd already suffered arthritis and permanent hearing loss, had a heart attack, followed by bypass surgery.

Ever stubborn, Les recovered, and returned to live performance in the late 1980s. Even releasing the 2005 double-Grammy winner Les Paul & Friends: American Made World Played, featuring collaborations with a veritable who's who of the electric guitar, including dozens of illustrious fans like Keith Richards, Buddy Guy, Billy Gibbons, Jeff Beck, Eric Clapton, and Joe Perry. In 2008, The Rock and Roll Hall of Fame paid tribute to Les Paul in a week-long celebration of his life which culminated with a live performance by Les himself.

Until recently Les continued to perform two weekly New York shows with the Les Paul Trio, at The Iridium Jazz Club in New York City, for over twelve years where a literal who's who of the entertainment world has paid homage. It has been an honor to have Les Paul perfrorm at The Iridium Jazz Club for the past twelve years hosting such luminaries as Paul McCartney, Keith Richards and others and is a tragic loss to owner Ron Sturm both personally and professionally. Iridium intends to celebrate Les Paul's music and legacy every Monday night.

The family asks that in lieu of flowers, donations be made to the Les Paul Foundation, 236 West 30th Street, 7th Floor, New York, New York 10001.