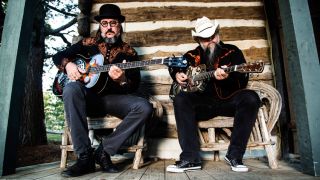 "This is my 'fuck-off vacation band,'" Les Claypool says of Duo de Twang, the stripped-way-down two-man operation he formed with his longtime friend Bryan Kehoe. "I don't have a big production with it. I get to crack jokes and drink on stage. Bryan and I can interact with the crowd and develop a repartee with them. It's just a fun time - more of a hang than a show."

Armed with a resonator bass and guitar and not much else, Claypool and Kehoe recorded their debut album, Four Foot Shack, live with no overdubs, ripping their way backwoods-style through a diverse assortment of traditionals, oddball covers (everything from the Bee Gees to Jerry Reed to Alice In Chains) and even some Americana-flavored reworkings of Primus classics.

While on tour with Primus in New Zealand, Claypool called into MusicRadar via Skype to talk about his new side project.

How did Duo de Twang get started? Was this something you were looking to do for a while?

"What happened was, I was asked to do something for the Hardly Strictly Bluesgrass Festival in San Francisco. So I grabbed my Dobro bass, my buddy Merv on guitar, and I started stomping on a drum case lid, and away we went. We did some of my tunes, some Primus tunes, Johnny Cash, Jerry Reed and various things.

"It was a good time and I decided to continue. Only thing was, Merv couldn't do it anymore, so I grabbed Bryan - I've known him since high school. We go and do these gigs where we're sitting in small theaters, drinking on stage - it's like we're sitting around a campfire. The gigs are a nice kick in the pants. The record sort of fell out of doing that."

A lot of people talk about minimal recording, but with you and Bryan it was as simple as it gets.

"Oh, yeah. The record is what it is - two guys in a room - so I wanted to capture that. All I needed was myself and Kehoe bangin' out the tunes. The only thing that was missing was the alcohol we drink on stage. There was no reason to go beyond minimal on this.

"We recorded to tape and mixed to an old ATR machine - very minimal miking and no effects, really. It was all about performance. But, you know, I was up against the same shit that they were in the old days. I had shit buzzin' in the background, things rattling in the room; sometimes you can hear Kehoe stomping on a switching unit for his amplifier. The whole thing was very organic."

You're still a tape aficionado.

"Well, I use tape for color. I mean, it's still laid into Pro Tools, and eventually it's mixed from Pro Tools to a two-inch master. To me, tape really does add color - I've yet to find a plugin that can replicate the tape compression I get from the ATR machine."

Are the cover tunes on the record representative of what you normally like to listen to?

"I mean, you have different slices of musical influences throughout your life; it just depends on what point in your life you're in. When I was 17, I wouldn't listen to any of this type of music - I was into metal and stuff. But as you move through life, different sounds and elements remind you of certain moments in time.

"My stepfather was a mechanic, and I remember he used to have the AM radio playing in his garage. He'd be out there cleaning up and drinking his Buckhorn beer, and I'd be working on my bike. I'd hear all these tunes - Johnny Cash, Jerry Reed, Waylon and Willie. I didn't really appreciate it at the time, but now those are some of the things I listen to. Because it represents a certain stage of my life, I have a definite fondness for it.

"A friend of mine was making fun of me recently 'cause I had a birthday party. He wanted to get a DJ - 'The girls wanna dance! The girls wanna dance!' I told him, "I don't want any damn DJ. I'll just play what I have.' And he said, 'I don't wanna listen to any of your goddamn hillbilly music.' And it struck me that that's what I'm listening to these days.

"This was reinforced when I went on a camping trip with my son. He plays the banjo, and one night we just sat around the campfire playing tunes. It was amazing, too - one of the greatest nights of my life. Take that to the stage with my other buddy Kehoe, and we have our little fake campfire; we put the lights down low, crack jokes and drink adult beverages. It's an enjoyable thing to do, and it's a good departure from some of the other things I've done."

Is Amos Moses one of those songs you heard on your dad's radio?

"Actually, that's one of the first 45s I bought as a kid. I remember saving up a dollar, which is what 45s cost back then. Amos Moses was one of the first ones I got because I was intrigued by the story about this Cajun alligator hunter. He was quite the character - and he was immortalized on Scooby-Doo. Amos Moses is a great song. And I'll tell you, Jerry Reed was one hell of a musician. He did those records with Chet Atkins back in the day - incredible guitar player."

What about Stayin' Alive? Is that one of those songs you didn't like at first and learned to appreciate?

"Bryan plays that guitar part pretty sweet, doesn't he? [Sings the part, laughs] You know, that's one of those songs you heard your entire life. And, of course, we all made fun of the Bee Gees 'cause they sounded like Flipper - not the band Flipper but the swimming mammal. It's just one of those things with that song, that same thing with Amos Moses, and even more so: You hear it and it brings you back to a moment in time. You've heard the song in movies, it's been in Airplane! - it's sort of everywhere.

"So one night I just started playing it - [sings] 'Well, you can tell by the way I use my walk, I'm a woman's man, no time to talk' - and we were laughing our asses off. Each night, we'd play a little bit more of it, and then I got Kehoe to do the guitar part. We were just crackin' up. Finally, we learned the entire thing and put it on the record."

You do a couple of Primus tunes, twanging them out. Is it hard to rework one of your hits?

"Nah, not at all. Twangifying tunes is pretty easy once you start doing it. Once I got the Johnny Cash thing down on my bass, I was able to do quite a few songs like that. Of the Primus tunes, Wynona's Big Brown Beaver is kind of an obvious one. When it was written, it was sort of a hillbilly piece. The reason why it came out the way it did was because I had this bass riff that we had kind of written the music around, and then I had this lyric in my notebook, so I took 'em and stuck 'em together.

"When I started putting together songs for the show in San Francisco, that one was an easy one. It's got that cadence to it, that sort of Buck Owens/Charlie Daniels thing. Same thing with Man In The Box, which might sound surprising. Kehoe used to play with Jerry Cantrell. One day, we were fucking around and we started doing the intro - 'Heyyyy, heyyyy, heyyyy!' Then we put that Johnny Cash thing to it, and off we went. It was easy. Some songs just come together and some don't."

What would be an example of a song that didn't work twangy?

"We tried to do Holy Diver, but the record was coming up and we just couldn't get it together. So it's not that it didn't work; we just couldn't get it in. I'm sure we'll pick it up again. Actually, it sounded pretty sweet - Dio de Twang. [Laughs] There's just so many. You start doing that rhythm and suddenly it's like, 'Hey, there's another one. There's another one.' We could easily do another album of these."

So you used a Dobro bass for this album?

"Well, it's a resonator bass. I don't know what company made it. It's this cheapie thing I got off the internet. It's not a Dobro - that's an actual brand. This company had given me one years ago, and it sat for a long time, but then I ended up using it on one of my records. I was working on a soundtrack for this horror movie, and I used it for the theme, sort of this slack tune - it was the song Booneville Stomp. Then I thought, 'Well, this thing is kind of cool… '

"I started playing it more and more, and it's been on a few Primus records, like the last one; it was on Lee Van Cleef and what not. I use it as a practice bass on the bus. It's become my 'hang-out-around-the-campfire beach bass,' or something like that. It's a cool instrument, and it was cheap." [Laughs]