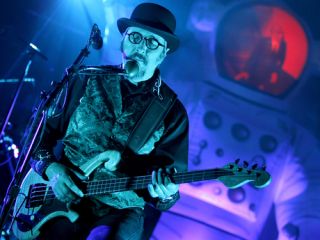 On 13 September, Primus will release Green Naugahyde, their first studio album in 11 years. While that might sound like a long time, bassist extraordinaire and frontman Les Claypool says it was all part of the plan.

"Primus had hit the creative wall by the end of the '90s, and Primus needed to sit," he told Spin. "Like a good compost, we needed to ferment and turn the manure and garbage into fine, nitrogen rich dirt."

Curious as to what rich dirt might sound like? Well, you can check out the first single from Green Naugahyde, a slappin' and poppin' masterpiece called Tragedy's A-Comin', right here. The song sees Claypool, guitarist Larry LaLonde and drummer Jay Lane laying down one heck of massive groove, as only Primus can.

Of Tragedy's A-Comin, Claypool says, "Lyrically, this is me focusing on eventual demise or at least the notion that big rain is coming and at some point I'm going to get pretty fucking wet. Who says lemmings can't dance as they go over the cliff?"