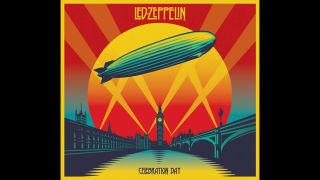 Will Led Zeppelin play again? The band members aren't saying no, but they're not saying yes, either.

The three surviving members of Led Zeppelin haven't exactly ruled out any reunion concerts, but they certainly aren't giving any strong indicators that they plan on playing live again.

At a press conference today in London to promote Celebration Day, the film that chronicles their 2007 reunion show at London's O2 Arena, Jimmy Page, Robert Plant and John Paul Jones took questions from reporters. As one might expect, most of them wanted to know one thing: When's the next gig?

"Let me ask you a question," Page said to a journalist. "Have you seen the film? Did you enjoy it? Then we've done our job, haven't we?"

Responding to another reporter who asked if the band would ever "do it again," Plant quipped: "With you?"

Some of the questions did focus on the film. Asked whether there were any overdubs to the live performances, Plant admitted that his vocals at the end of Kashmir had to be edited "because I was running out of steam." Page stated that overdubs were kept to a minimum.

So, while it's debatable whether you'll ever see Led Zeppelin live in the flesh again, you can watch them on film: Celebration Day will have a worldwide theatrical release on 17 October. The picture will then be available in "multiple video and audio formats" on 19 November.