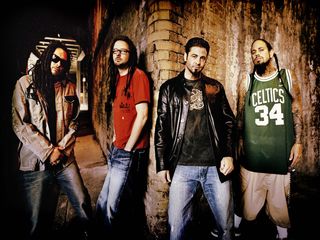 Korn bassist Fieldy has written a new book Got The Life: My Journey Of Addiction, Faith, Recovery And Korn.

The book includes letters that Fieldy - born Reginald Arvizu - wrote to each of his Korn band-members apologising for his past bad behaviour.

Korn have been here before as a band. Previous Korn guitarist Head - born Brian Welch - left the band in 2002, citing that he had "...chosen the Lord Jesus Christ as his savior, and will be dedicating his musical pursuits to that end."

Fieldy, 39, admits he has struggled with alcohol, drugs and overeating. He confesses to eating food off other people's used room-service trays, and even from trash cans. He was also a womanizer and liked to intimidate anyone, male or female, who disagreed with what he calls "Fieldy's rules."

"I was as bad as it gets," he says. "What I wrote in the book, I was probably worse than that. I couldn't really explain how bad it was."

Fieldy admits to being an alcoholic since the age of "13 or 14" and lays bare his access to drugs via 'rock doctors'.

Fieldy's being honest about his plight and the potential reaction to his book, though:

"I may get more criticism today in putting this book out than I have," he says. "You know, maybe this is my time, but I'm ready to take the criticism and answer anybody's questions."

Korn play the UK's Download festival in June 2009, and are writing music for their next album.