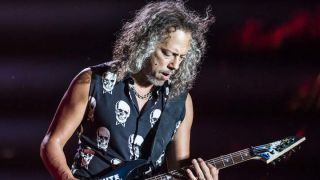 The duo have been developing the US made boutique line for the last couple of years, and already have players like Disturbed's Dan Donegan and Gojira's Joe Duplantier using prototypes on stage and in the studio.

First up, and available just in time for Halloween at the end of October, will be the Ghoul Screamer above. Described by KHDK as the 'Swiss Army knife of overdrives', it offers five switches in addition to the standard drive, tone and volume controls. Bass, High, Body and two Compression switches could bring a potentially huge amount of tonal options for your drive needs.

"I love it," says Kirk, "I get such a balanced tone from it." Elsewhere, a No.1 Overdrive and No.2 Clean Boost rounds out the initial line (but no wah as yet, folks).