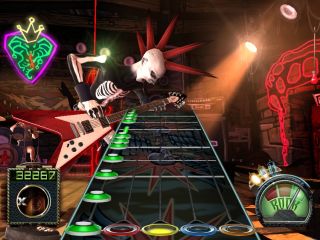 Danny Johnson, a 14-year-old from Grapevine, Texas has broken the world record for most points scored on Guitar Hero III: Legends Of Rock.

The plastic guitar-wielding maestro scored 973,954 during a seven minute rendition of DragonForce's Through The Fire And Flames.

Of course, the shred masterpiece that is Through The Fire And Flames is the games most difficult song.

Danny shares a few of his secrets: "you really have a choice of using Star Power during Red Snake or during the Twin Solo" (c'mon, everyone knows that!). But what we're most interested in is the trail of broken plastic he leaves in his wake.

…And You Will Know Us By The Trail Of…

During the record, Danny came within a few seconds of playing all 3722 notes flawlessly, but was cut short at 3558 when the controller's blue button ceased to work beneath his finger assault. Apparently Danny has destroyed 80 controllers during his nine-month quest for Guitar Hero greatness.

If the Guitar Hero world had a Pete Townshend equivalent (The Who guitarist wasn't exactly a stranger to axe destruction), it's probably safe to say we've found him.